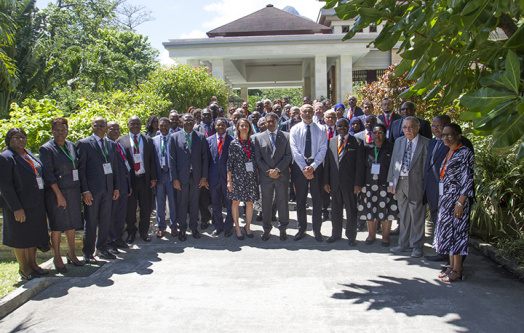 The Southern African Chief Justices’ Forum (SACJF) is a multinational forum of Chief Justices from across Southern and East Africa. Established in 2003, SACJF aims to uphold the rule of law, democracy and independence of the courts through regional cooperation and solidarity.  SACJF Members meet annually in a member country, allowing the region’s most senior jurists to reflect on critical issues on justice delivery in the region. This year’s theme is “without fear or favour: maintaining a strong, impartial, independent and accountable judiciary”

Delivering the welcoming remarks at the Opening Ceremony, the Chief Justice of the Republic of Seychelles, Dr Mathilda Twomey, reminded the delegates present of the important role the forum plays and benefits it brings to member states amidst the ever-changing threats affecting judiciaries worldwide.

President Faure delivered the opening remarks, nothing that this year’s conference sees the participation of 10 Chief Justices, making it one of the largest gatherings of the region’s most senior jurists. He said, “This year’s conference theme, ‘without fear or favour: maintaining a strong, impartial, independent and accountable judiciary”, speaks to the importance of the judicial branch of government in a constitutional democracy. Judicial collectives such as this are extremely important platforms that allow for the complex navigation and discussion of what judiciaries need to realise their constitutional mandate.”

“Standing here today, I am reminded that democracy is the result of a delicate status quo that requires the continual maintenance of a system of checks and balances. This is the system that prevents the accumulation and abuse of power and ensures that government exists to serve the individual and not the other way around. The importance of the judiciary in maintaining and sustaining this status quo cannot be understated. Through the hosting of this year’s Forum, Seychelles is proud to play its part in facilitating shared learning and co-operation among the judiciaries represented in this room and beyond,” continued President Faure.

The ceremony also saw the presentation of the Aspirations and Roadmap for the Southern African Judicial Administrators Association (SAJAA) presented by the Vice-President of SAJAA, Mr Walter Chikwana, and the Keynote, Aspiration and Roadmap of SACJF presented by the Honouroble Chief Justice of Malawi and Chairperson of SACJF, Mr Andrew Nyirenda.