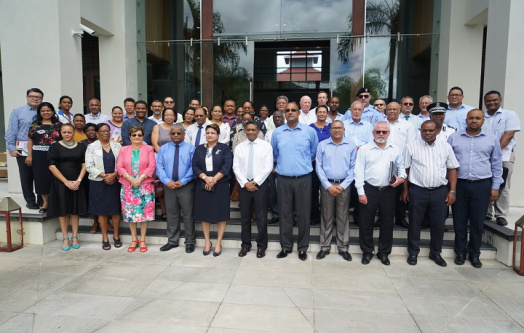 The President of the Republic of Seychelles, Mr Danny Faure, officially launched the National Drug Control Master Plan (NDCMP) 2019-2023, as part of the activities commemorating the World Aids Day, at Eden Bleu hotel this morning.

The National Drug Control Master Plan 2019-2023 is an operational planning tool that provides a framework for comprehensive national drug control in Seychelles. It incorporates new approaches in line with the international drug control conventions and national legislation. The overall aim of the NDCMP is to improve the wellbeing and safety of the individuals and population at large.

During his opening remarks, President Faure reaffirmed the Government’s commitment to address and counter the drug problem afflicting Seychelles. He also noted the work being done with international partners to stop drugs such as heroin to enter the country.

“We are putting a lot of resources into putting pressure on the drug trade in Seychelles. We are working very aggressively with regional partners to prevent an influx of heroin in particular, and cut the pathways for these drugs coming in. But what we have to recognise is that in our globalised economy, the most important thing we can do is reduce the demand for drugs. And the only way we can reduce demand is if we are providing treatment and thinking about this as a public health problem and not just a criminal problem. It follows that the National Drug Control Master Plan highlights the need for drug supply and demand reduction strategies to complement each other,” said the President.

The NDCMP 2019-2023 has been developed with the combined efforts of the Agency for Prevention of Drug Abuse and Rehabilitation (APDAR), the United Nations Office for Drugs and Crimes (UNODC) as well as national partners and stakeholders.

President Faure also called upon civil society, NGOs, faith-based organisations, schools, communities and citizens to come together in the fight against drugs abuse. The President announced that the government will soon set up national standards for drug demand reductions so as to enable everyone to participate in the national drug control efforts.

The Head of State also announced the rehabilitation village that will soon be built at Bon-Espoire. The village is expected to cater to both male and female as well as children under the age of 18 years. It will offer detox and drug-free rehabilitation for drug abuse, and skills-building in fields such as carpentry, masonry, agriculture and information technology.

During the ceremony this morning, there were also addresses by the Leader of the Opposition, Hon. Wavel Ramkalawan, Leader of Government Business in the National Assembly, Hon. Charles Decommarmond, and Secretary of State for the Prevention of Drug Abuse and Rehabilitation, Dr Patrick Herminie.

Also present for the ceremony this morning was the Designated Minister, Mrs Macsuzy Mondon, members of the Cabinet of Ministers, Principal Secretaries, CEO of APDAR, Ms Geralda Desaubin and other distinguished guests.