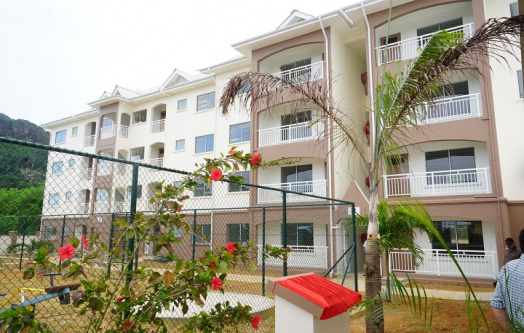 President Danny Faure attended the official opening of the “Roche Caiman Extension” Housing Estate this afternoon, where 16 families have been given the keys to their new home. The President was accompanied by the Minister for Habitat, Infrastructure and Land Transport, Mrs Pamela Charlette, and had the honour of unveiling the plaque to officially declare the Housing Estate open.

Speaking at the event, Minister Charlette stated that despite limited land in the district, the Ministry was able to build 16 housing units, and reaffirmed the Government’s commitment to building new homes under the 24-24 project.

Her remarks were followed by the vote of thanks on behalf of the new home owners by Mrs Nicolette Beaudouin, after which the President toured the housing estate.

The contract for the Roche Caiman Extension and construction of 16 residential housing units was awarded to Allied Builders in May 2018. The housing project was completed in the first week of July 2020 and comprises of 8 two-bedroom and 8 three-bedroom units. The project totalled a cost of 11.7 million Rupees. Residents benefiting with a unit were on the prioritised list accumulated under the housing point system from the Roche Caiman district.

The ceremony was also attended by the Minister for Family Affairs, Mrs Mitcy Larue, Member of the National Assembly for Roche Caiman district, Hon Audrey Vidot, Roche Caiman District Administrator, Mr Wilbert Omath, staff from the Ministry of Habitat, Infrastructure and Land Transport and PMC, and other distinguished guests.