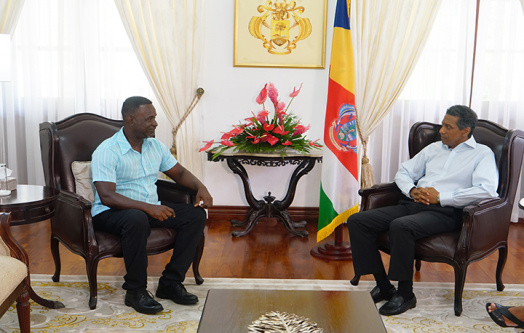 President Danny Faure welcomed Mr Cliff Mathiot this morning at State House, following his heroic act that saved the life of an 8-year-old girl during a fire incident at Petit Paris on Monday, where she was trapped inside house on fire.

President Faure expressed his honour to receive a local hero at State House and on behalf of the people of Seychelles conveyed his sincere appreciation to him for his bravery and courage that ensured a little girl is still alive today. "On behalf of the country, I would like to say thank for your courage and selfless action. You risked your own life to save another and for that we are profoundly grateful," said President Faure.

Mr Mathiot, who also resides at Petit Paris, shared with the Head of State how the incident happened and his gratitude to find the courage to enter the burning house. The meeting was an opportunity for him to share his story with the President and his plans for the future.

Speaking to the press after the meeting, Mr Mathiot said he is happy to have received recognition from the President and that as a father with a daughter of his own, he had no choice but to enter the house despite the fire to rescue the girl and save a life.