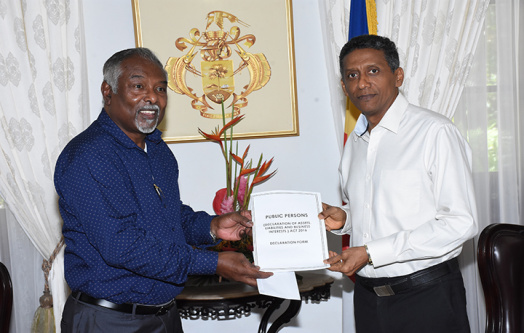 Talking to the press, Justice Renaud said that he is happy to have received the declaration of assets from the President and noted that President Faure is the first Head of State in Seychelles to declare his assets. With regards to the ongoing process as a whole, Justice Renaud confirmed that he is satisfied with the way that it is unfolding. He noted that the forms for the public persons to fill in are complicated and expressed willingness to assist as necessary.

The Public Persons (Declaration of Assets, Liabilities & Business Interests) Act, 2016 makes provision for the declaration of assets, liabilities and business interests by the President, Vice President, Designated Minister, Ministers, members of the National Assembly, including the speaker, deputy speaker, leader of the opposition, leader of government business, the mayor of Victoria and the councillors of district councils.

Commissioner Renaud explained that there are two groups of public persons that need to submit their declaration of assets to him, the first group are those that their service in office has come to an end or has resigned, whereby they were given one month which ended on the 07th September 2020 to handover their forms. As for those still in office, Justice Renaud said that they have until the 09th November 2020 to submit their declaration of assets.