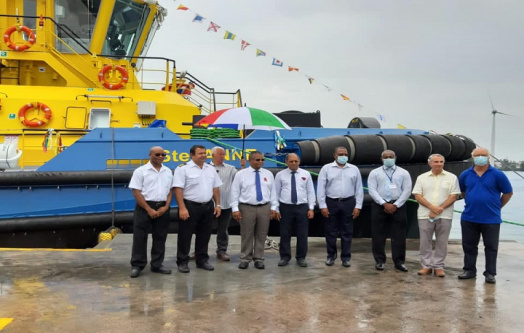 The President of the Republic, Mr Wavel Ramkalawan today attended the official inauguration ceremony of Seychelles Ports Authority’s (SPA) most recent addition of its maritime fleet; a new tug boat under the name Ste. Anne, at the New Port, Victoria.

Berthed at the Mahé Quay, Ste Anne is equipped with state of the art modern technology. The tug fleet holds bollard pull of 60 tonnes and is equipped with Azimuth Stern Drive (ASD). The vessel was built in Turkey by a company under the name SANMAR. It cost SPA 5.125 million Euros equivalent to SR117, 750,000 to buy this new tug boat.

In his statement at the ceremony this morning, President Ramkalawan highlighted the primordial role that the Seychelles Ports Authority plays in the economic development of the country. He praised them for their new acquisition amongst their fleet which has been bought by revenue this Authority has managed to acquire through its operations during the past years. The President reiterated the government’s support and noted how SPA continues to seek ways to further develop port related services and said that Seychelles should encourage the development of a dry dock or ship repair facility in order to create more value added services for the country.

The ceremony was highlighted by flag hoisting and blessing of the vessel. Furthermore, as per maritime tradition, a Lady sponsor: Maureen Barbier unveiled the name of the boat, perform the christening as well as the traditional placing of a silver coin in the wheelhouse of the vessel. To note, the silver coin represented and honoured the 250th anniversary of the first settlement in Seychelles.

The President and other distinguished guests were invited to view the different facilities of the boat, followed by a tour just outside the quay.

On his part, the Chief Executive Officer for SPA, Mr Ronny Brutus said that today’s ceremony marks an important milestone in the history of this Authority. He reaffirmed the SPA’s commitment to develop, maintain a high standard of service and facilities at the port that is top in the region.

Present for the inauguration ceremony was the Vice President, Mr. Ahmed Afif, the Minister for Transport, Land Transport, Civil Aviation, Ports & Marine, Mr Antony Derjacques, the Mayor of Victoria, Mr David Andre, the Chairperson of the Board, Commodore Paul Hodoul, board members of SPA, Staff of SPA and other guests.