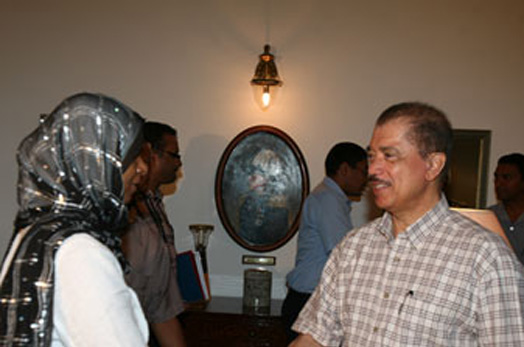 Ms Al-Hinai, who is the chairperson of Seychelles' WTO accession working party and Oman's deputy ambassador at the world trade body, is here for discussions with various stakeholders.

The WTO delegation was accompanied to State House by Seychelles' ambassador to the European Union Vivianne Fock-Tave and our chief negotiator for the WTO accession, Charles Morin.

On Monday the WTO delegation met Vice-President and Minister for Finance and Trade Danny Faure and other high government officials.

Talking to the media after meeting Mr Michel, Ms Al-Hinai said her delegation briefed him on the talks with Mr Faure and other stakeholders, including leader of government business Marie-Louise Potter and leader of the opposition in the National Assembly Wavel Ramkalawan.

"Mr Michel was very positive and welcoming towards the results of the meetings, which I think is a very good start for Seychelles' accession to the world trade body," she said.

She said the talks have shown a very high level of commitment from the government towards its accession to the WTO which she believes will move things forward.

Mr Morin highlighted the various benefits the talks will bring for Seychelles at a time which he described as "right and appropriate".

Though the process of joining the world body is long, the benefits are enormous - among them an increase in investor confidence and protection for local business and trade - he added.

Seychelles restarted the process of joining the WTO in 2008.