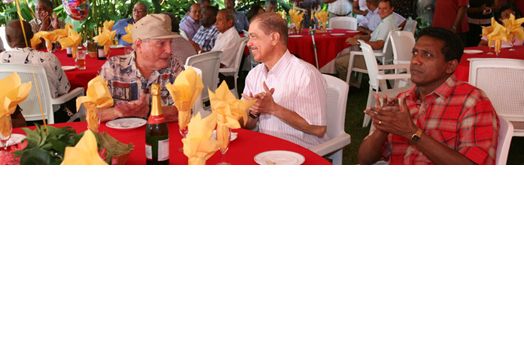 Mr Michel noted that life in Seychelles used to very difficult, and that it took a lot of hard work to develop the country.

"President Rene transformed this country to what it has become today. On behalf of the Seychellois people and myself, I say thank you, President," said Mr Michel.

On their special relationship, President Michel said he and Mr Rene have the same vision of development, of social justice and equality of opportunities for the Seychellois people, and for this reason they are united in their work for the country.

President Michel told the over 500 guests at the reception that older people in Seychelles have a duty to educate the young generation and remind them that the country has made outstanding progress.

"We, older people, we have a duty to continue to educate our young people and remind them that our country has come a long way in its development, and that today they have a lot of opportunities," said President Michel.

Former President Rene asked the nation -- including those who do not necessarily share his opinions -- to work together to ensure our country continues to be the jewel of the Indian Ocean.

He congratulated President Michel and his government for understanding the needs of the nation and to work on improving the economy.

The State House birthday event has been held for 32 years now to show appreciation for the senior citizens' contribution to Seychellois society.

A book entitled France Albert Rene - Seychelles from the Heart was launched at the reception. Written by Gilbert Pool, the book tells the story of Mr Rene's involvement in Seychelles development since 1964.