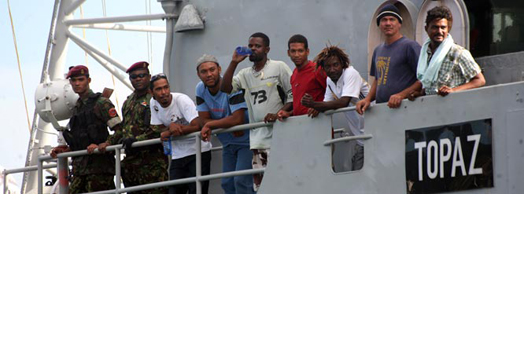 November 23, 2010 -- Seven Seychellois fishermen have returned to Mahé following their rescue by the Seychelles Coast Guard from Somali pirates this weekend.

"Today I share the joy of the fishermen and their families, and I share in the joy of the Seychellois people. When our citizens are taken hostage, we are all affected, and when they are released we all rejoice," said President Michel.

The President also congratulated all the officers of the Topaz and the Andromache, as well as the Tazar unit.

"We welcome you home with much pride. The two anti-piracy operations show the courage of our men in uniform... once again we have shown that Seychelles, although we are a small country, we have the courage to defend our country and our people. These two operations have sent a clear message... to the Somali pirates that are attacking our fishermen and our country; that you don't play around with Seychelles," said President Michel to the officers of the Seychelles People's Defense Forces.

The President also said that he would ensure that the armed forces have the resources they need to defend the country.

"I give my commitment to the Seychellois people, as your Commander in Chief , that we will defend our nation and citizens at all costs and take all necessary measures to make sure that we protect our people and our nation."

The Seychelles People's Defense Forces maritime surveillance aircraft, in a joint operation with the EU NAVFOR Luxembourg maritime patrol and reconnaissance aircraft as well as the EU NAVFOR French E3F aircraft detected the boat and the presence of pirates onboard.

The pirates headed northwest towards Somalia and the Seychelles Coast Guard intercepted the boat half way between Somalia and Seychelles. The hostages were rescued and the 11 pirates were arrested. Two of them were wounded during the exchange of fire in the operation. One of the two wounded Somali pirates died on Saturday night onboard a Coast Guard vessel.