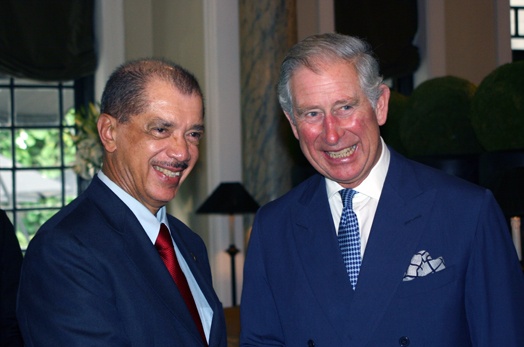 President James Michel attended the opening ceremony of the Commonwealth Heads of Government Meeting in Colombo today. It was opened by His Royal Highness, Prince Charles, the Prince of Wales on behalf of the Head of the Commonwealth of Nations, Her Majesty, Queen Elizabeth II, and hosted by the Sri Lankan President, Mahinda Rajapaksa.

Following a colourful opening ceremony and discussions with other Commonwealth leaders in the executive sessions, President James Michel met with HRH The Prince of Wales at Paradise Road Tintagel hotel, for a bilateral meeting.

The Prince of Wales commended Seychelles on its environmental protection record in terms of sustainability and protecting its land territory by law. The Prince is a well-known advocate for environmental protection and the fight against climate change.  They discussed the ways which Seychelles and the UK can engage in developing innovative programmes together to mobilise support all the world for these causes.

President Michel added; “We must also strengthen our efforts to establish protected areas which contribute towards carbon reduction, and Seychelles is proud to have designated 50% of its land territory as protected- the largest proportion in the world.”

The President spoke to the Prince about the blue economy concept which Seychelles is advocating and the way it can be developed through policies and programmes, as well as the HRH’s own charitable organisations.

“We have committed to declare 30% of our Exclusive Economic Zone as protected ocean areas, which form part of our Convention on Biological Diversity targets. … We discussed how we can work together to stop the further deterioration of our ecosystem and slow down climate change as we are both passionate about these global concerns,” said President Michel.

The President also discussed the ‘Debt for Adaptation’ swaps that has been endorsed by this Commonwealth meeting. It is a practical tool that Seychelles has proposed towards addressing both the debt burden of Small Island Developing States (SIDS) as well as their need to urgently mobilize support for climate change adaptation.
“We discussed the ways to enhance sustainable fisheries by creating marine-protected areas and leveraging  financing to mitigate the loss of income from reduced fishing over a period of time, but raising the value of fishing in the long term, so that fisheries becomes more viable,” said President Michel.

Piracy in the western Indian Ocean was also a topic of discussion, where  the role that Seychelles has played in fighting the maritime threat was elaborated, in particular the success of Seychelles’ anti-piracy operations.

“Your Royal Highness, it has been a great pleasure to meet with you today, and we would like to welcome you to the shores of our beautiful Seychelles…. I look forward to many more years of friendship and cooperation with the UK,” said the President.

Also present in the meeting was the Seychelles Minister for Foreign Affairs, Jean-Paul Adam.