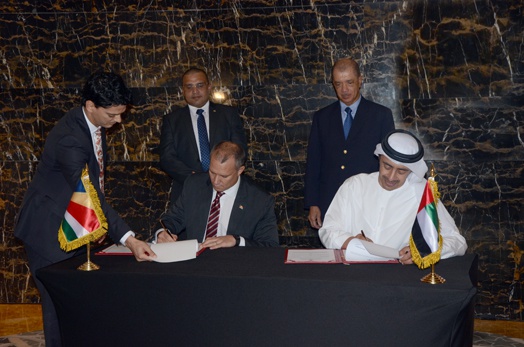 President James Michel has welcomed the signing of a visa waiver agreement, which will allow all Seychellois passport holders to travel without a visa to the United Arab Emirates (UAE), following a working visit to Abu Dhabi this weekend.

The President said the signing of the visa waiver agreement between the United Arab Emirates and the Republic of Seychelles is testament to the close relationship and the strength of the partnership between the two countries.

“Seychelles is the first African country to not need a visa when entering the UAE which is symbolic of the longstanding relationship which will further bolster our two countries bilateral ties," he said.

The visa waiver agreement signed between the Republic of Seychelles and the UAE allows for visa free travel for all Seychelles nationals. It is in addition to an agreement exempting Seychellois diplomatic and official passport holders from visa requirements when travelling to the UAE, which was signed two years ago.

Minister Adam described the signing as a fulfillment of a pledge made to the people of Seychelles facilitating unrestricted access and greater connectivity to the world.
“It has always been a matter of policy for the Government of Seychelles, and the unrelenting mission of the Ministry of Foreign Affairs to remove restrictive visa barriers for Seychellois wishing to travel. Visa free entry for all Seychellois to the UAE heralds a new period in travel for our people,” said the Minister.

All Seychelles passport holders are exempt from a visas to the UAE for a period of no greater than 90 days, however all traveller must ensure that requirements set by the UAE Immigration Authority are fully met.

Whilst the new agreement provides for visa-free travel by Seychelles nationals to the UAE, the Ministry of Foreign Affairs stresses that the visa waiver does not allow for Seychellois nationals to work or pursue studies within the territory of the UAE, unless prior authorization from the authorities concerned is given.

The agreement will come into effect once the internal procedures of both states are completed. The Ministry of Foreign Affairs will inform the public in due course as and when the agreement comes into force.

During the visit to Abu Dhabi, the President and his delegation also attended the Abu Dhabi Formula One Grand Prix, as guests of His Highness Sheikh Mohammed bin Zayed Al Nahyan, Crown Prince of Abu Dhabi and Deputy Supreme Commander of the UAE Armed Forces.

President James Michel expressed his appreciation for the excellent relationship shared between Seychelles and the leadership of the UAE. “The signing of this agreement greatly advances cooperation conducive to both sides. We count on reinforcing this common success by the signing of this document. We always consider the UAE a great friend and always well disposed towards Seychelles.