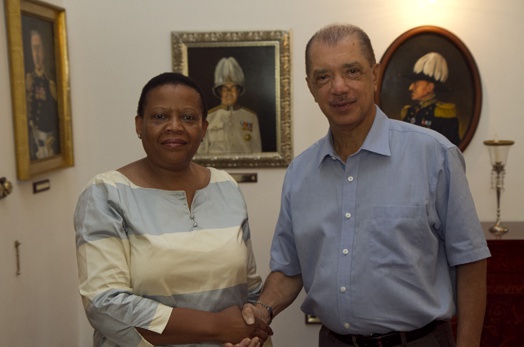 Seychelles committed to the development of access to information

President James Michel met with the African Union Special Rapporteur on Expression and Access to Information in Africa, Ms. Pansy Tlakula, this morning at State House. Ms. Tlakula is in Seychelles on an advocacy mission to promote and encourage the adoption of the Model Law of the African Commission on Access to information to all African Union (AU) States, in a visit organised by the Seychelles Media Commission.

The President said he welcomes the visit of the rapporteur and her team, and expressed support for their plans to hold further consultations in Seychelles for the development of an access to information law based on an African Union model law.

“We are building a strong and functioning democracy. It is important to improve our institutions and ensure transparency and accountability, it is the way forward for the whole continent of Africa, to espouse the ideals of freedom of expression and access to information,” said President Michel, who also holds the portfolio for Information.

During the meeting, Ms. Tlakula briefed the President on her mission to Seychelles, meetings held with the Ministry of Foreign Affairs, the Speaker of the Seychelles National Assembly as well as civil society organisations.  She also suggested that future workshops be organised to educate those interested in what access to information entails.

Speaking to the national media after her meeting, she said that the President is supporting the initiative to begin a conversation on the necessity of having access to information by law. She also said that she had a meeting with the Minister of Foreign Affairs on on-going projects for law reform such as repealing the criminal defamation or criminal libel laws that is still in the statue book and that the  Seychelles constitutional review process is an indication of the work and the commitment that Seychelles has to ensure that freedom of expression and access to information are respected.

“The meeting was very fruitful, because we got a commitment from the President of your country that discussions will begin on this very important topic led by the Seychelles Media Commission. Seychelles is one of a few countries on the continent that has entrenched the Right of Information in its Constitution, because most countries don’t have, they simply have the Freedom of Expression in the Constitution…,” said Ms. Tlakula.

“Seychelles is proud to be a country at the forefront of mobilising its citizens access to information as part of bringing more development to its people.  Seychelles is at the forefront of efforts in Africa for ensuring more access to information by bringing government closer to the people, by improving digital access, and by proactively disseminating information- the recent launch of the Seychelles News Agency, being an example of this proactive approach.  We look forward to the discussions facilitated by the Media Commission and the African union towards strengthening the tools for access for information and building national capacity”, Minister Jean-Paul Adam remarked.

Ms. Tlakula said that apart from the proposed workshop, it has also been agreed through the Seychelles Media Commission training for journalists on a number of topics such as parliamentary reporting, reporting on elections and court cases, which are all specialised areas of journalism.