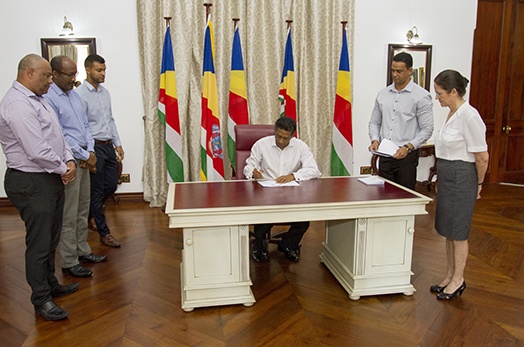 President Faure Assents to the Access to Information Act 2018

The Right of Access to Information is guaranteed under Article 28 of the Constitution of the Republic of Seychelles. This Act gives the public with the constitutional right of access to information held by public authorities performing a governmental function.

“This is important because public authorities spend money collected from taxpayers and make decisions that can significantly affect many people’s lives.  As such people have a right to know about the activities of public bodies, unless of course there is a good reason for them not to under exceptional circumstances under non-disclosure. Giving the public access to such information will help make the public bodies accountable for their actions and allow the public to be better informed, make better decisions and become more productive,” said Vice-President Vincent Meriton who holds the portfolio as Minister for Information in his address at the ceremony.

He continued, “This passing on of information to the public will be achieved in two ways. Firstly, public bodies are obliged to publish certain information about their activities proactively. Secondly members of the public are entitled to request information from public bodies through an Information Officer whom each public body has to appoint with their names and details gazetted. The Act explains clearly the procedures for entertaining and dealing with requests”.

The Act will be administered and applied by an independent Information Commission, the setting of which has been cleared with the enactment of the Law. The Commission will be appointed by the President in consultation with the Speaker of the National Assembly on the recommendation of the Constitutional Appointments Authority (CAA).

Once the Information Commission is established, it shall make recommendation to the President of a Chief Executive Officer for the Commission.

As part of training and capacity building, moreover ensuring the successful implementation of the Act, the Committee is working with the World Bank for possible assistance under the Open Government Partnership (OGP) programme to train Information Officers and officers working in public offices and build capacity within public bodies in areas such as record keeping, storage and retrieval of information.

“It is important that all officials charged with implementing the act understand it and support it. They must have a complete understanding of the law so that they can answer questions from both the public as well as other officers, and where necessary, provide advice to the head of their organisations. A new mindset of openness on the part of public bodies will also facilitate the work of the information officers who will have to deliver the service to the public on their behalf,” said Mr Meriton.

A comprehensive public education programme is being planned for further assessment and implementation by the Commission.