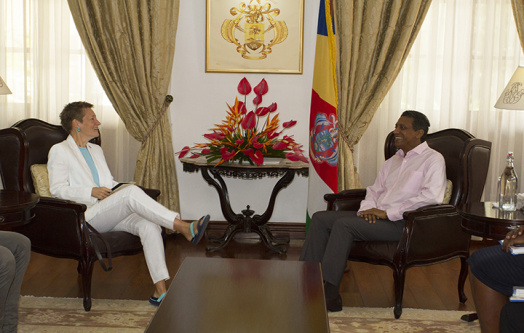 The outgoing British High Commissioner to Seychelles, H.E. Ms Caron Röhsler, paid a farewell call on President Danny Faure at State House this morning, following the end of her four-year tenure in Seychelles.

President Faure thanked High Commissioner Röhsler for her hard work, dedication and contribution to further cementing the strong ties between Seychelles and the United Kingdom. The President commended her for her efforts to initiate and build on cooperation in various sectors.

“What you have done during your tenure has been tremendous. You have been committed to your work and you will be fondly remembered by our people for the series of projects you have supported, especially at community-level. You have worked closely with Seychelles to develop sectors as the blue economy, defence, and maritime security, among others,” said President Faure.

The President and the High Commissioner reviewed the various cooperation programmes between the UK and Seychelles, especially in transparency, accountability and good governance. They spoke of the plans to increase cooperation and develop new partnerships in the future.

Following the meeting, High Commissioner Röhsler said that the United Kingdom and Seychelles will continue to further cement cooperation in the field of the blue economy, maritime security, democracy and climate change.

Ms Caron Röhsler was accredited as High Commissioner to Seychelles, on 8 September 2015.