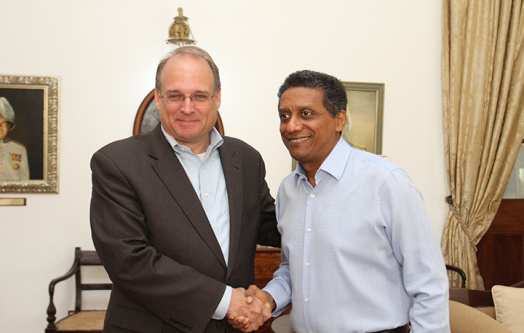 President Danny Faure received the Assistant Secretary for Terrorist Financing at the United States Department of the Treasury, Mr Marshall Billingslea, for a courtesy call at State House this morning.

Mr Billingslea and his delegation are currently in Seychelles to further strengthen the relations between the United States of America and Seychelles in the financial system and see how they can assist in improving the country’s laws that deal with anti-money laundering and countering the financing of terrorism, among other areas.

President Faure welcomed Mr Billingslea and his delegation to the country and reaffirmed Seychelles’ commitment to further advance the relationship with the U.S.A, a solid bilateral partner, and explore new avenues for collaboration.

During the meeting, the discussion between the Head of State and Mr Billingslea centred on how Seychelles and the United States of America can intensify their cooperation in fighting money laundering, drug trafficking, marine security and other threats affecting the country.

Speaking to the press after the meeting, Mr Billingslea described the relations between the United States of America and Seychelles as very close and positive. He said that the economy of Seychelles is very strong. He said during his time in Seychelles he would be meeting with the Governor of Central Bank about expanding digital technology in the financial sector and getting the banking system fully digitised.