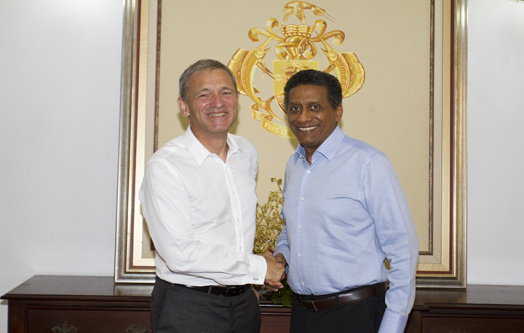 The new Ambassador and Head of the delegation of the European Union (EU) to the Republic of Seychelles, H.E. Mr Vincent Degert, presented his credentials to President Danny Faure at State House this morning.

"I would like to thank the European Union for all it has done for Seychelles. It has stood by us in good times and in bad times. We look forward to working with you in existing and also new areas of cooperation. The EU is like-minded, and we share a lot of common values, such as the utmost respect for democracy and rule of law. I look to the EU to continue providing the necessary support in terms of capacity building to consolidate what we have achieved together,” said President Faure.

During the meeting, President Faure and Ambassador Degert discussed areas of common interest and value to both Seychelles and the European Union, such as the fight against terrorism, maritime security, trade and investment, financial stability, climate action, and environmental conservation. Furthermore, they talked on avenues to broaden their cooperation.

Speaking to the national media following the accreditation ceremony, Ambassador Degert said that during his mandate he will try his best to raise the level of cooperation between countries in the region.