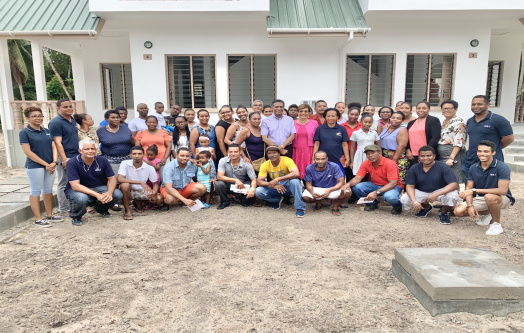 The President of the Republic, Mr Danny Faure, witnessed the official opening of the L’Union Housing Estate this afternoon, where 24 families on La Digue Island received keys to their new homes.

The official opening ceremony coincides with activities organised by the Ministry of Habitat, Infrastructure and Land Transport (MHILT) to celebrate Habitat Week 2019.

The L’Union Housing Estate project, which began construction in October 2018, comprises of 24 three-bedroom units at a cost of 34.6 million Seychelles Rupees and took contractors slightly over 11 months to complete.

Addressing the guests present at the ceremony, the Minister for Family Affairs, Mrs Mitcy Larue, highlighted the government’s continued commitment to ensure visions such as the 24 Units in 24 districts becomes a reality. She urged the residents to take good care of their new homes and to come together as neighbours in ensuring it becomes a community where peace, respect and love exists.

On behalf of the L’Union Housing Estate community, a new resident of the estate, Mrs Dora Morel, delivered the vote of thanks. She expressed appreciation to the government, MHILT and to the district authorities for making their dreams of owning their own home possible.