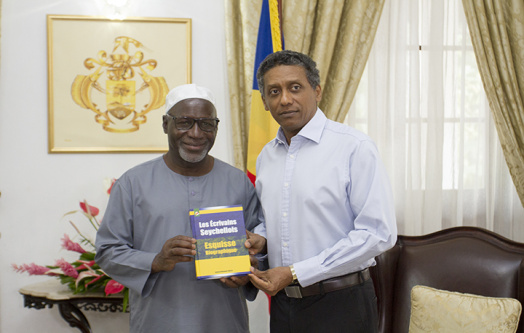 President Danny Faure received a personal copy of the book “LesÉcrivains Seychellois” (in English: The Seychellois Writers) written by well-known local writer Mr Abdourahamane Diallo this morning at State House. The book is a collection of biographies of Seychellois writers.

The President congratulated Mr Diallo on the accomplishment of his publication and commended him for the immense contributions he has made for the people of Seychelles, particularly in education and in the research and preservation of the Seychellois culture.

“I would like to personally thank you for your contributions and I look forward to reading your book. This is a powerful collection and you have set a great example. It is my sincere wish that others follow in your footsteps,” said President Faure.

Mr Diallo is a former teacher and was amongst the first batch of expatriates from Guinea to work in Seychelles in the 1980s. He served for 31 years in government before his retirement, working in education, culture and finally with the Creole Institute.

Now at 70 years of age and retired, the meeting with the President this morning was an opportunity for Mr Diallo to share with the Head of State his experiences during his career, the conception of his book, as well as some of his future projects linked to preservation of cultural music such as moutia and traditional nursery rhymes.

Speaking to the press after the meeting, Mr Diallo expressed his honour at having been received by the President which he said symbolised the importance the President attaches to culture and the continuous support provided to this domain. He also thanked the Government through the Department of Culture for the financial support for assisting with publishing of the publication through the National Arts and Culture Fund.

Mr Diallo was accompanied at State House by the Principal Secretary for Culture, Ms Cecile Kalebi