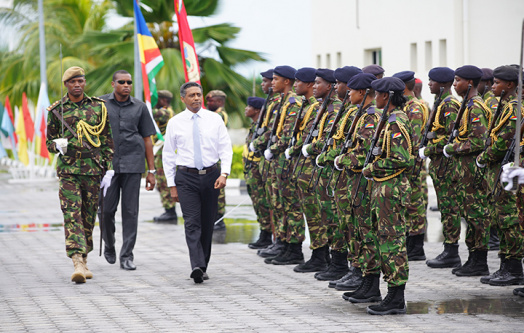 The event was presided over by the guard of honour and the National Brass Band and was blessed by defence forces Chaplain Louis Agathine.

During the ceremony, President Faure had the honour to present special awards and medals to retired Major Margaret Louise, Captain David Plows and retired Staff Sergent Jenna Ragain. The special awards recognise their contribution towards the development of the SPDF.

The President also presented awards to the longest-serving personnel for 35 to 40 years, among which are Captain Alex Serret, WOII Jenna Volcy and Staff Sergeant Jovette Bristol, who have served for 40 years in the military.

There were also promotions given among which to the rank of Major for Captain Daniel Rosine, Captain Alain Pierre and Captain Hans Radegonde.

In his address at the event, the Chief of Defence Forces, Colonel Clifford Roseline, said that the celebration of Defence Forces day is a time of reflection for the SPDF, to look at the progress that has happened and lessons learnt. He noted that the SPDF has embarked on a new chapter, one that is more modern and professional, with new measures and programmes in place for the youths to join the military and to keep those already in the army.

Also present at the ceremony were the Chief of Staff of SPDF, Colonel Michael Rosette, Commissioner of Police, Mr Kishnan Labonte, Units Commanders, the staff of the SPDF and other distinguished guests.