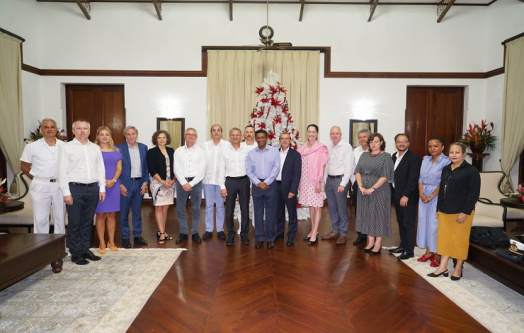 On behalf of the Government of Seychelles, the President thanked the EU for their continued support, particularly in capacity building and maritime security, and reaffirmed his commitment to further strengthening the EU-Seychelles partnership.

“We share a history with the European Union and as like-minded partners, we share common values,” said the President.

During the meeting, President Faure was briefed on the 7th EU-Seychelles Political Dialogue aimed at strengthening the partnership for a sustainable and peaceful future, in addition to other meetings held with local stakeholders in areas where the EU and Seychelles share common interests.

The Head of State and the EU Delegation also touched on critical areas of cooperation including the environment, climate change, anti-corruption, regional cooperation, as well as maritime security.

The EU delegation comprised of representatives from 11 European Union member states, and the Deputy Commander from the EU Naval Force Atalanta.

Also present was the Ambassador of Seychelles to the Kingdom of Belgium, Ms Beryl Samson.