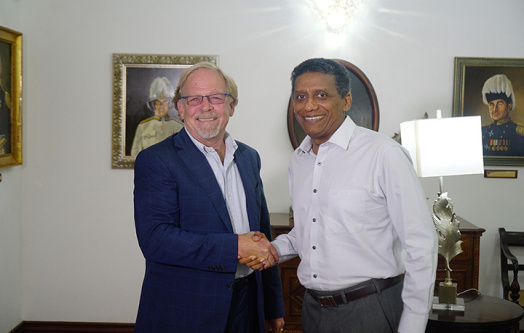 The Country Director for Seychelles at the World Bank, Mr Mark Lundell, paid a courtesy call on President Danny Faure at State House today. He was accompanied by the Country Economist representative for Mauritius and Seychelles, Mr Eric Von Uexkull.

The President welcomed Mr Lundell once again to Seychelles and thanked the World Bank for its support in various sectors which has helped Seychelles in its development.

During the meeting, the Head of State highlighted the damage that has been caused by the extreme high tides last year, and that has been continuing up until now. He stressed that the country would like technical expertise in the coastal environment sector to help the country determine the strategies and/or projects needed to soften the impact on the worst-hit areas. Once these are identified and costed, Government would be in a better position to source financing and ensure implementation.

“As far as the urgency to address the coastline issue, we will mobilise people as soon as quickly as possible in the next month or two. We need to look for a development partner in financing, because there is an existing coastal zone erosion investment plan for the country that was finalised in 2019. We need to bring as much financing to initiate that plan as quickly as possible, and gain momentum such that other development partners become aware of the impact of climate change on Small Island Developing States and can support with implementing the full plan,” said Mr Lundell in an interview with the local press.

Mr Lundell briefed the President on meetings he has had with officials during his visit and he commended the Seychelles government for setting up the Blue Economy Council and the work of the Blue Investment Fund. He said that he is pleased with the progress that has been made.