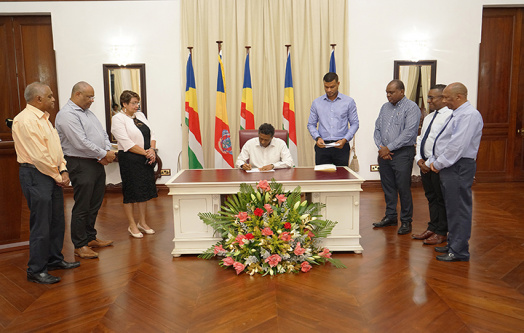 The President of the Republic, Mr Danny Faure, assented to the Seychelles Maritime Safety Authority (SMSA) Act 2019 and Merchant Shipping (Amendment) Act 2019, at a ceremony at State House this morning. The Acts were approved by the National Assembly on 17 December 2019, and were received by the President on 31 January 2020.

The SMSA Act 2019 will give the Seychelles Maritime Safety Authority (SMSA) the authority over certain responsibilities which previously fell under a variety of officials and organisations, e.g. the Minister responsible for maritime affairs, the Harbour Master and the Seychelles Port Authority.  The SMSA will henceforth be an independent and autonomous organisation which will be governed by a Board of Directors.

President Faure also assented to the Merchant Shipping (Amendment) Act 2019. Through the Act, SMSA will empowered to regulate and enforce maritime legal provisions, rules, procedures and conditions, making it the principal regulator for maritime affairs.