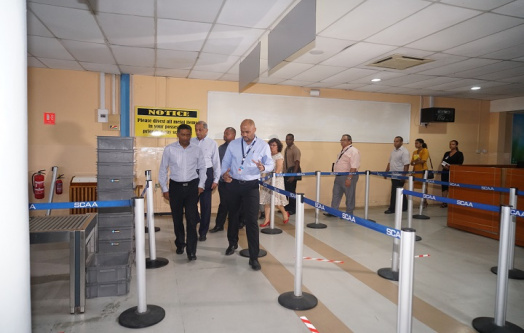 President Danny Faure visited the Seychelles Civil Aviation Authority (SCAA) at the Seychelles International Airport this afternoon, as the country prepares to re-open its borders.

President Faure was given a tour of the premises where he observed the various measures that have been put in place at the airport. He visited the arrival lounge, including reinforced immigration counters, screening areas and medical rooms, and also toured the departure terminal and check-in counters.

Following the visit, the President met with the Chairperson and management team of the SCAA where they shared an overview of the new facilities at the airport to reinforce safety in light of the COVID-19 pandemic. President Faure also received an update on the current global aviation situation and the ongoing work of SCAA. Discussions also included the current challenges facing the SCAA and solutions moving forward.

At the meeting, the President reiterated the importance of re-opening the airport to support the livelihoods of citizens and support the economy, and highlighted that public health and safety would continue to be the priority:  “As we re-open the airport, all workers here at SCAA need to work in a manner they have never worked before; now more than ever you cannot afford to take your job lightly. We count on you to spearhead this new way of doing things and be strict with enforcing Public Health guidelines,” said President Faure. “Where enforcement is concerned, I count on each of you to be at the forefront and continue to work closely with the Public Health Authority.”

President Faure also congratulated Mr Patel on his new appointment as Chairperson and thanked the outgoing Chairperson, Captain David Savy, for his hard work and dedication during his term.