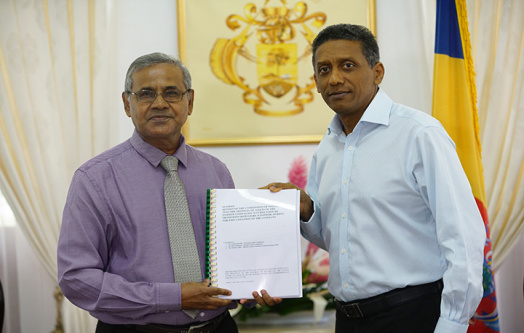 President Danny Faure has today received the Interim Report of the Commission of Inquiry into the disposal of assets of COSPROH during the course of its privatisation.

The Report was presented to the President by Mr Gamini Herath, the Auditor-General, who was Chairman of the Commission.

The Commission of Inquiry was established by President Faure in August 2018, following a motion passed by the National Assembly for such a Commission.

The President said that Government would study the Report, and act on its recommendations and address any outstanding shortcomings and issues highlighted by the Report.

A copy of the Report will be sent to the Speaker of the National Assembly.  A soft copy will also be made available on the State House Website at www.statehouse.gov.sc