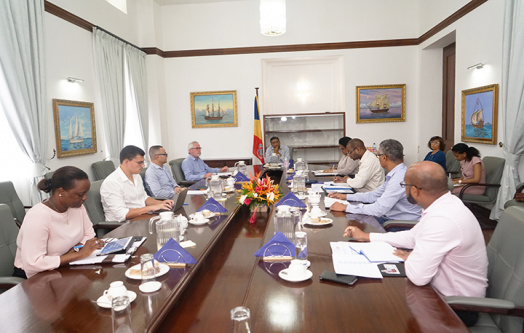 President Danny Faure chaired a meeting with officials from the Ministry of Employment, Immigration and Civil Status, the Ministry of Finance, Trade, Investment and Economic Planning and the Seychelles Employee Transition Scheme (SETS) at State House this afternoon.
During the meeting, the President was appraised on the status of redundancies in the country and the progress of response measures in place.
The Head of SETS, Mr Guy Morel, informed the meeting that SETS has received a total of 177 applicants to date, whereby 52 have already secured an employment opportunity. The remaining 125 people have registered with the company and are following an induction programme. According to Mr Morel, SETS has already identified 300 potential placements so far and highlighted the positive response of the private sector to partner with the scheme.
The Department of Employment gave an update on the applications for redundancies that have been received. From March to June 2020, the Department has received 100 applications from various sectors from which 634 Seychellois are going to be made redundant. 33 applications have been approved so far, where 228 Seychellois employees have been made redundant. The posts of 392 expatriates have also been made redundant. The Department of Finance also shared the ongoing implementation of the Financial Assistance for Job Retention programme (FA4JR).
The meeting highlighted the system put in place by Government to ensure there is limited disruption to employee welfare and that any liabilities to the employee as per the existing law are settled by employers prior to redundancy.
Present for the meeting at State House this afternoon was the Minister for Employment, Immigration and Civil Status, Mrs Miriam Telemaque, Minister for Finance, Trade, Investment and Economic Planning, Mr Maurice Loustau-Lalanne, Secretary of State for Finance, Mr Patrick Payet, the Economic Advisor to the President, Mr Bertrand Belle, Special Advisor for Employment, Ms Veronique Bresson, the Principal Secretary for Employment, Mr Jules Baker, Head of Seychelles’ Employee Transition Scheme (SETS), Mr Guy Morel and Director General for Labour Relations, Mr Steve Monnaie.