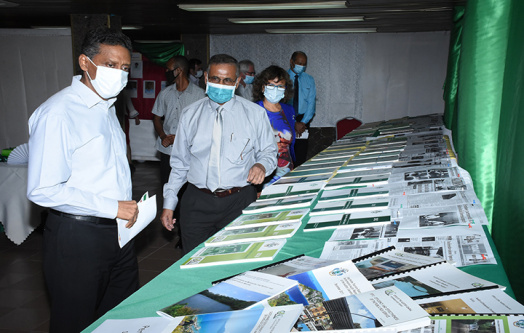 The President of the Republic, Mr Danny Faure, attended a ceremony to mark the 10th anniversary of the Office of the Auditor General held this morning at the International Conference Centre Seychelles (ICCS).

In his opening address, the Auditor-General, Mr Gamini Herath, said that since a new Auditor General Act came into force in 2010, his office has made a significant milestone in the long history of Seychelles national audit service, which has existed in different forms under all systems of governments over the past 250 years.

“Under the new law, the office was established as a body corporate with wide-ranging powers and safeguards for greater independence. In drafting the new law, we drew on the experiences of leading national audit service providers from across the world and we came up with the best practice at the time,” said Mr Herath.

The Auditor-General thanked everyone locally and internationally for their support and gave a presentation which showed the positive impact the new law has had on the ranking of Seychelles’ National Audit Service within the international community. The ceremony was also highlighted by a report and photo exhibition to commemorate the day, and President Faure was given a visual tour of the work the Office of the Auditor General has done over the years.

Also present at the ceremony this morning was the Speaker of the National Assembly, Hon Nicholas Prea, Minister for Finance, Trade, Investment and Economic Planning, Mr Maurice Loustau-Lalanne, the Attorney General, Mr Frank Ally, Chairman of the Human Rights Commission, Justice Bernardin Renaud, CEO of the Public Enterprise Monitoring Commission, Mr George Tirant, staff at the Office of the Auditor General, and other dignitaries.