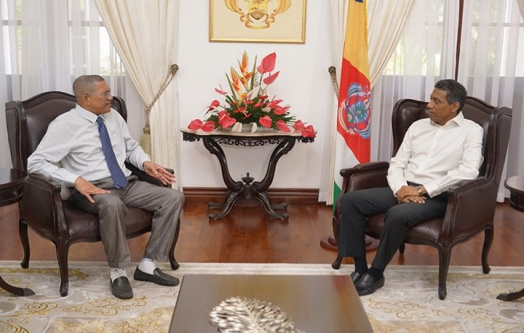 The President, on behalf of the Government and the people of Seychelles, congratulated Honourable De Commarmond on his achievements and expressed his sincere appreciation for his hard work and devotion over 33 years as a Member of the National Assembly. President Faure also thanked him for his contributions and working tirelessly to defend the fundamental principles of the party and for serving the people of Cascade. Honourable Decommarond shared his experiences and plans for retirement, and was presented with a token of appreciation by the President.

Speaking to the media after his meeting with the President, Hon. De Commarmond said that he thanked the President for the responsibility entrusted to him over the years. He said that he is satisfied with the work he has done and that he will continue his work at the political level as a party member. He also said he is ready to share his experiences with his successor.

In 1984 to 1985, he completed a political course in Magdeburg, Germany and in 1989 completed his graduate studies at the Moscow State University in Moscow, Russia. From 1991 to 1993 he was the District Council Chairperson for Cascade District. In 1993 with the reintroduction of Multiparty Democracy and the Birth of 3rd Republic, Hon. Charles de Commarmond was elected Member of National Assembly for the Cascade District.

In May 2015, towards the end of the 5th Assembly, he was elevated to the position of Leader of Government Business (LGB) in the National Assembly, a position which he was entrusted from September 2016 to date.