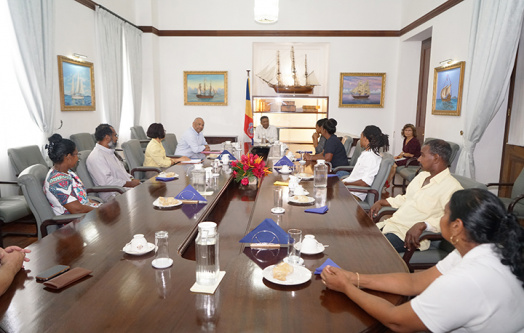 President Danny Faure together with the Attorney General, Mr Frank Ally, met with the Fanchette, Morel and Serret families this morning at State House. The meeting was in relation to the tragedy where four crew members disappeared at sea when the Sea Horse caught fire early morning on 24 August almost two years ago and subsequently sank off the coast of Coetivy.

The Attorney General explained the details of the decision of the Supreme Court in the case brought by the Islands Development Company (IDC). He also explained the outcome of the Inquiry under the Presumption of Deaths Act to declare the crew members dead. The families of the victims had the opportunity to clarify their concerns and share their grievances since the tragedy.

Following his meeting with the families, President Faure ordered the appointment of a Commission of Inquiry into the circumstances leading to the death of the crew members that went missing. The Commission of Inquiry will be appointed next week. The Fanchette, Morel and Serret families were briefed on the procedures of such an investigation and the expected timeframe within which the findings will be presented.

The Fanchette, Morel and Serret families have welcomed this decision and are looking forward to the outcome of the Commission of Inquiry in order to find closure.

Present for the meeting this morning was the Attorney General, Mr Frank Ally, and the Principal Secretary for Public Affairs in the Office of the President, Mrs Doreen Arnephy.