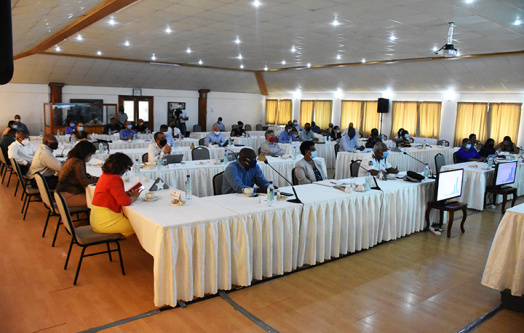 President Danny Faure chaired a fifth follow-up session of the high-level forum leading the implementation of the National Integrated Framework for the opening of Seychelles’ international airport at the STC Conference room this morning.

The Public Health Commissioner, Dr Jude Gedeon, provided an overview of the global situation and the local context with regards to COVID-19, where he confirmed one imported active case in Seychelles. He also raised concerns around illegal gatherings of big groups in the communities which is against the law given the declaration of a Public Health Emergency.

The Task Force Committee also provided an update of its work, with its chairperson, Minister for Tourism, Civil Aviation, Ports and Marine, Mr Didier Dogley, sharing the work of the Committee over the last two weeks. Minister Dogley spoke about the steps in place to sustain the reopening of the airport as well as to give confidence to key partners in Europe so as to increase the number of visitors to the country.

This was followed by updates from the Department of Tourism and Seychelles Tourism Board on the marketing aspect as well as on the forecast of expected tourism arrivals in Seychelles. As for the SHTA, its Vice Chairman, Mr Alan Mason, reported the SHTA’s position regarding the guidelines and laws in place for the tourism industry.

Following the re-opening of the airport, from 1 to 30  August 2020, Seychelles received 2006 visitors. President Faure confirmed that 31 million Dollars has entered the country as a result of the decision to re-open Seychelles’ borders, as per data from the Central Bank. “This outcome is the direct result of a collective decision. We need to continue working together to maintain consistency in the market and ensure there is confidence in our decisions,” said the President.

Speaking about the recently announced transit accommodation for special status countries, President Faure thanked the 71 establishments that have agreed to take part, subject to meeting criteria set by the Task Force Committee. He also reiterated the importance of members of the public observing the guidance given by the Public Health Authority and recognising their responsibility in implementing the National Framework for integrated management.