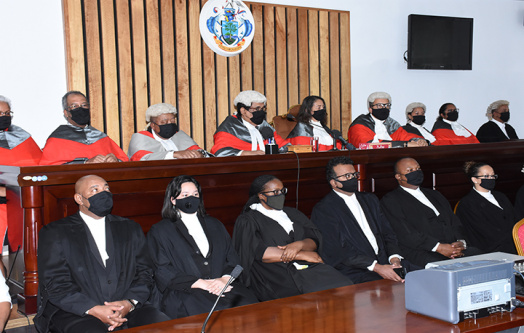 During the ceremony presided by Judge Mohan Burhan, there were statements made by senior council, members of the Bar Association of Seychelles, members of the bench and other Justices.

Speaking at the ceremonial sitting, the outgoing Chief Justice said, “Today I want to speak to the everyday people living in our country. The courts exist for you. We in this room are parts of the mechanisms of state that were designed to serve you. The government and its branches were built for the societal benefit and every ounce of power that we have is drawn from this document called the Constitution which belongs to ‘We the People’.”

She discussed highlights of her tenure and her agenda of change, including standardising procedures, improving record and case management and recruiting new magistrates, judges and vital support staff. Noting the progress that has been made, she also looked ahead to remark on all that still needs to be done.

She raised five calls to action: constitutionalism, ensuring the constitution permeates all levels of society, accountability, ensuring people are held accountable for their actions, dismantling patriarchy and the need for greater gender representation in the judiciary, vigilance in consuming and producing information, and courage to do the right thing.

The Chief Justice Twomey thanked her team, the judicial officers, the dedicated registry staff, management team and other support staff for their hard work and support over the last five years.

The outgoing Chief Justice was appointed on 7 August 2015. She was the third Seychellois Chief Justice and the first woman to take up this post. During her tenure in office, Chief Justice Twomey contributed immensely to the judicial system and helped greatly in advocating for the rights of women in society.