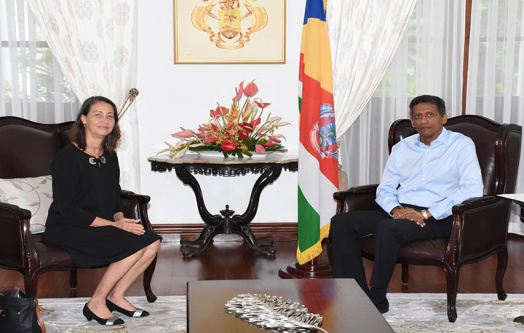 President Danny Faure received the outgoing Chief Justice of the Supreme Court, Mrs Mathilda Twomey, at State House this morning, where she formally presented the Head of State with her intention to end her mandate. Mrs Twomey effectively served her last day as the Chief Justice of the Supreme Court yesterday 30 September following a 5-year mandate.

President Faure conveyed his sincere appreciation on behalf of Government and the people of Seychelles for the tremendous work accomplished during her tenure as Chief Justice and for her monumental contributions to the judicial sector. The President wished Mrs Twomey the very best in her future endeavours.

Speaking to the press after the meeting, Mrs Twomey says she is grateful for the having served as Chief Justice over the past 5 years and for what she has managed to achieve despite various challenges. She expressed her wish to continue serving the country in various professional capacities, particularly as a Judge of the Court of Appeal as well as through academia and teaching.