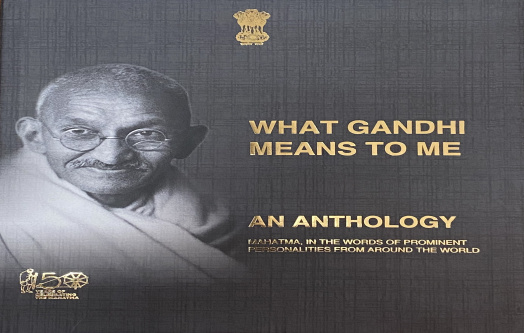 President Faure receives a copy of "What Gandhi Means To Me: An Anthology"

The President was presented with a copy of "What Gandhi Means To Me: An Anthology", a book commemorating 150 years since the birth of Gandhi. Commissioned by the Ministry of External Affairs in India, the book features contributions from Heads of State and prominent personalities from around the world, including President Faure.

President Faure's contribution to the landmark publication reads as follows:

150 years ago, a global apostle of peace was born. On this day we commemorate the memory of an extraordinary soul, who left behind an eternal message of peace, unity, and nonviolence.

Mahatma Gandhi’s life was marked by his great sacrifice and his great leadership. He brought down colonialism and strengthened civil liberties through nonviolent resistance, inspiring movements for civil rights and freedom all over the world.

With the support of the Sabarmati Ashram Preservation & Memorial Trust in Ahmadabad, Seychelles’ High Commissioner to India Philippe Le Gall, recently discovered that Gandhi wrote about Seychelles in 1910 in his paper, Indian Observer. Gandhi never visited Seychelles, but in 1901 he spent 3 weeks in Mauritius and heard of the community of Indian origin living in a neighbouring dependency he called ‘Cecil’, close to the Creole for Seychelles, ‘Sesel’. In his article, he makes reference to the population of Indian origin in Seychelles, praises their hardworking spirit despite the distrust they encountered from the colonial system.

Mahatma Gandhi lived, thought, and acted with the vision of all of humanity moving toward universal peace and harmony.  Gandhi’s 150th birthday should renew our hope and determination to realise his dream of a world free from injustice and oppression. On this milestone occasion, may we recommit ourselves to translating his values into action and live in his vision across all peoples and all nations.