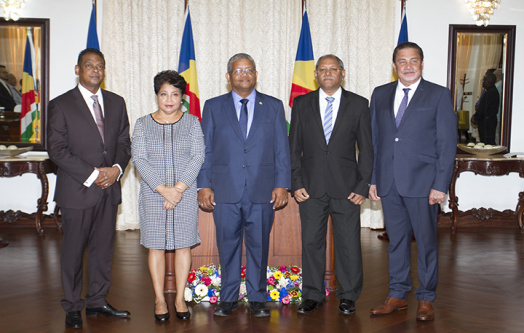 The two remaining Ministers nominated, Minister Sylvestre Radegonde and Minister Billy Rangasamy were sworn into office in the presence of the President of the Republic, Mr Wavel Ramkalawan during a swearing in ceremony, held at State House, this morning. The two Ministers will be leading the Ministry of Foreign Affairs and Tourism and the Ministry of Lands and Housing respectively.

During the ceremony, the Ministers took three Oaths; The Oath of Allegiance, The Official Oath and the Oath of Secrecy. President Ramkalawan appointed the two ministers under Article 69 (2) of the Constitution of the Republic of Seychelles. The nominations were approved by the National Assembly of Friday 30th October. However, both Minister Sylvestre Radegonde and Minister Billy Rangasamy were under quarantine after arriving from overseas and thus could not take their oaths with the other Ministers on 3rd November.

Addressing the audience after the swearing in, the President congratulated the two new Ministers joining the Cabinet. He expressed his conviction without a doubt that with their respective competencies, are both ready to undertake their new tasks head-on to serve the country and the people of Seychelles. With the new Cabinet now complete, President Ramkalawan urged all the Ministers to give their very best and to always be reminded that their mandate is to serve the people. He reiterated his call for them to always remain guided by the theme 'Sesel pour tou son zanfan' (Seychelles for all its children) hence allowing any Seychellois willing to work together to make a contribution and move Seychelles forward.

Speaking to the press after the ceremony, Minister Radegonde as the new Minister for Foreign Affairs and Tourism, with over 25 years of experience in Diplomacy said he was not expecting to be appointed as a Minister and that he is nonetheless prepared to impart his knowledge and experience for the benefit of the country. Minister Rangasamy, joining the Ministry for Lands and Housing said he is immensely proud and excited to be joining the new Cabinet of Ministers and with his vast international exposure and knowledge, the time has come for him contribute to the development of his country.

Also present at State House for the ceremony was, the First Lady, Mrs Linda Ramkalawan, the Vice-President, Mr Ahmed Afif, the Honourable Speaker of the National Assembly, Honourable Mr Roger Mancienne,  the President of the Court of Appeal, Justice Anthony Fernando,  the Chief Justice of the Supreme Court, Justice Rony Govinden, Leaders in the National Assembly, Ministers, the Attorney General, Mr Frank Ally, other distinguished guests, friends and relatives of the Ministers.