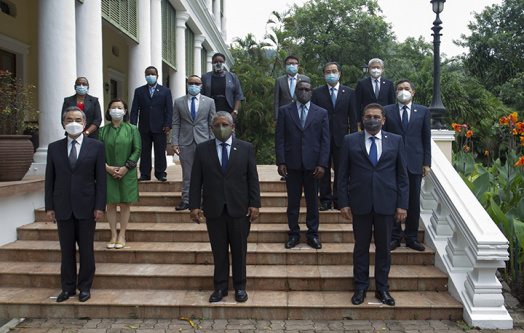 President Ramkalawan welcomed Mr Wang and his delegation on their official visit to Seychelles. He noted how significant this visit is for a small country like Seychelles, as part of a five-day African official tour Mr Wang is conducting, and highlighted the importance it brings to it. Noting that this year marked the 45th anniversary of the establishment of diplomatic relations between the two countries, Mr Wang spoke of the new momentum in Seychelles-China relations under the leadership of President Ramkalawan and to chart the way forward for increased cooperation and a new era in the relations between the two countries.

The President reconfirmed the support of Seychelles towards the One China Policy. He underlined the excellent relations that exist between Seychelles and China where he described it as “exemplary” and how the Seychellois people are counting on China’s continued support through a win/win partnership. The two dignitaries commented on their shared ideal of relations pillared on mutual interest, respect for international laws and economic recovery while encouraging impetus for discussions on peace, security, stability and the will to bring those agendas to greater heights.

During the meeting Mr Wang announced that China will be financing a RMB 40 million fund under the Economic Cooperation Agreement (ECA), for mutually agreed upon projects in Seychelles.

Discussions also centred on avenues to strengthen bilateral traditional friendship and expand cooperation in nationally prioritized fields such as the Blue Economy, Tourism, Environment, Fisheries and Renewable Energy. Here, President Ramkalawan expressed the gratitude of the Government of Seychelles for the continued support China has given over the years in undertaking diverse projects towards the country’s socio-economic development. Notable mentions such as the completed Corgate Estate Redevelopment Housing projects and the ongoing construction of the Seychelles Broadcasting Corporation (SBC) building were touched upon. The President also thanked Mr. Wang for the annually awarded scholarships from the Chinese government for Seychellois to further their studies in China.

Both President Ramkalawan and H.E. Mr Wang reaffirmed their commitment to boost the excellent relations between Seychelles based on the present economic situation while addressing the characteristic vulnerabilities of Seychelles by developing our present relationship to an unprecedented height.

In the international arena, both recognised the efforts made to reinforce the relations between the two countries as well as between China and the countries in Africa through various multilateral platforms such as the Forum on China-Africa cooperation (FOCAC) initiative.

During his visit to Seychelles, H.E. Mr Wang Yi and his delegation entered further discussions with the Minister Foreign Affairs and Tourism, Mr Sylvestre Radegonde, which was followed by the signing of a Memorandum of Understanding that the Department of Foreign Affairs will elaborate on.