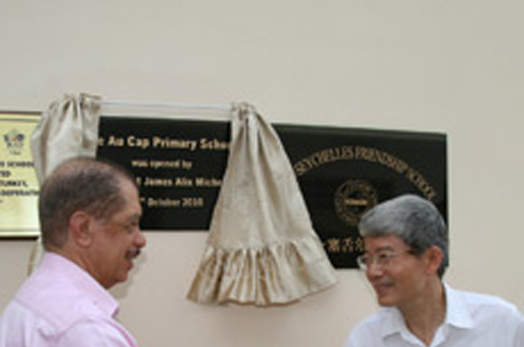 October 8, 2010 -- President James A Michel has said that the government is after more quality education as it sets out to reach new targets.

The President was at Au Cap yesterday to officially open the new Chinese-built school.

He said the new school is a clear sign of the excellent cooperation that exists between the Chinese and Seychelles governments.Â Â

"China has always helped us in our economic and social development, be it in education, health or housing," said the President.

He added that China's support for African countries has intensified, and Seychelles is among the privileged partners.

The construction of the school is also a result of the active diplomacy that the government has embarked on to bring more investment into the country, the President said.

He noted that the Ibrahim Index of African Governance for the year 2010, published this week, rates Seychelles second out of 53 countries overall, and second in human development.

"This shows that the government's aim and commitment to attain the millennium development targets which also demand that all countries give primary education to their children," he said.

President Michel explained that Seychelles achieved this target before the year 2000 and now "we have set new targets which aim towards providing more quality education for our children".Â Â

Also present at the inauguration were Education, Employmenmt and Human Resources Minister MacSuzy Mondon, Ambassador Wang Weiguo of China and ambassador Tunder Kyalar of Turkey whose government provided all the furniture for the new school.