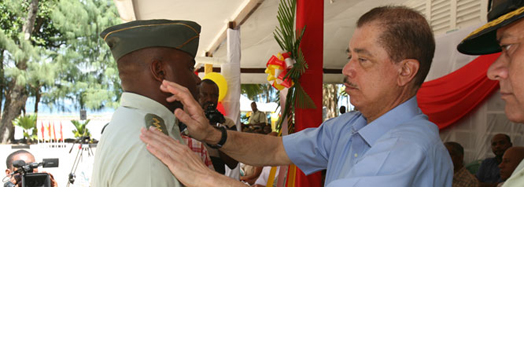 November 25, 2010 -- President James Michel, who is the Minister for Defence and the Commander-in-Chief of the armed forces, has launched a new vision for the Seychelles People's Defense Forces on the occasion of Defense Forces Day today.

The President said that the new vision, which includes a series of reforms in a 'culture of consultation,'Â  would promote a clear sense of direction for the Forces and which will prepare Seychelles for any kind of eventuality.

The new vision will consolidate and promote cohesion, harmony and unity in the Forces andÂ  ensure discipline and teamwork.

"I hope that each soldiersÂ  sees himself or herself in this new vision, and that each young person who has not made a career choice yet, but who has an unconditional love for his country, will also see his place and join us. Each solider will feel appreciated by his country, by his government and his superiors," said President Michel.Â

The President announced that a new "scheme of service" would be introduced in January 2011 which will offer higher salaries and other benefits, as well as a new pension scheme for the SPDF.

The reforms of the SPDF include the modernisation of the command structure and military procedures, plans to obtain new equipment and facilities, steps to motivate and encourage soldiers in their work and give them career guidance, to give more high-level training, a new welfare plan, as well the introduction of new specialised areas of work as radar and modern communications systems.

The President also congratulated the Defense Forces for their braveÂ  action in the recent anti-piracy mission, where 7 Seychellois fishermen were rescued and 16 pirates captured, and noted that the SPDF had clearly proved its raison-d'être: to defend the people of Seychelles.

"When some people were shouting "lets shut down the SPDF, Seychelles does not need a military force, Government is spending too much on the military, it's a waste of money," we saw beyond that; we, who love Seychelles, we wanted to protect this blessed people and the peace which we enjoy. This year's events alone, where we saw our men in uniform defend our territory against Somali pirates, where our men in uniform saved the lives of our Seychellois brothers, confirmedÂ  to us that this government had foresight and this Government love Seychelles," said President Michel.