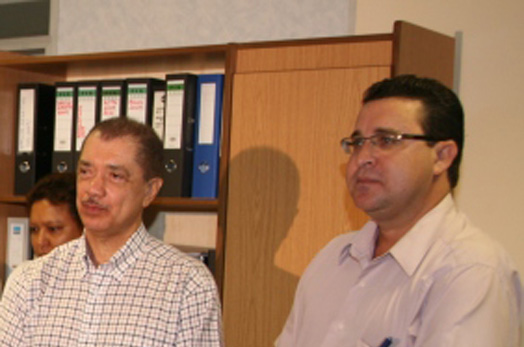 March 26, 2010 -- The young professionals, who make up the Central Bank of Seychelles' workforce, have played a major role during the modernisation of our economy and success of the reform programme.

This was said by President James Michel yesterday as he visited the central bank (CBS). He said the CBS is an example of how an institution can empower young Seychellois to play a key role in the country's economy.

He added that we should all be proud that other countries are learning from how we have so quickly reformed the economy, adding that the bank has played a major role in formulating our economic policy, which he described as very solid.

The President asked CBS staff to continue developing their competence to help the institution realize our mission of a better economy in a competitive environment.Â  He said the banks have to be the motor of the economy, bringing the oxygen our economy needs to thrive. He noted that if banks cut their interest rates further this will allow more people to take loans, and this will invigorate the economy.

President Michel remarked that there are many young people with good and innovative ideas who want to play a part in the economy, both in the public and private sectors. But we have to give them the chance they need so they can transform the country and the economy to make them more modern.

Mr Michel said efforts will continue to create favourable conditions to encourage Seychellois -- particularly young graduates -- to serve our country instead of going overseas.Â  He is advising the young professionals to form an association through which they can share and offer ideas. He said that although the government has done a lot in the past, it needs to see what else can be done to encourage them to stay in Seychelles.

The President said the global recognition of the Seychelles rupee as a strong performer -- as reported in the international media this week - shows the success of the economic reforms he initiated in 2008.

Noting that we have stayed on track with the programme, he said Seychelles has been a leader in many fields, for example in the environment and human resources development. He said we should be proud that others are following our example and are interested in knowing how we have managed to transform our economy within such a short time.