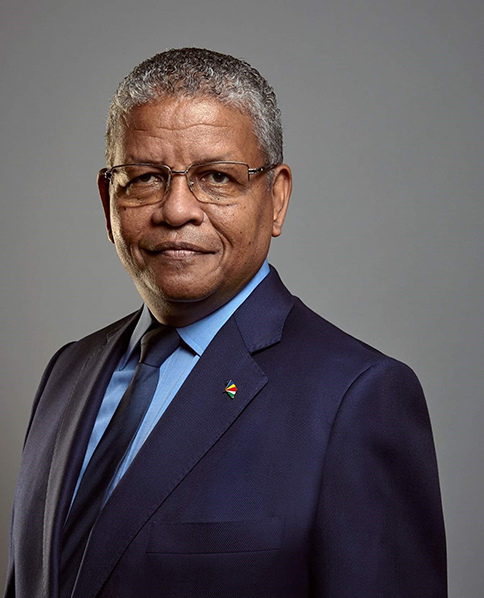 President of the Republic of Seychelles

Wavel Ramkalawan was born on Mahé, the principal island of Seychelles. His father was a metalworker and his mother a primary school teacher. He is married to Linda and has three boys, Samuel, Caleb and Amos. He is an ordained minister in the Anglican Church.

It was his work mission as a priest that led Ramkalawan to politics. Through his pastoral work, he came into contact with many people who had been the subject of repression and abuses of human and civil liberties by government. At that time, the church was the only institution that could speak out on these issues.

In 1990, Ramkalawan preached a landmark sermon, broadcast to the nation on the national radio station, in which he questioned the practices of the one-party government and gave voice to the desire of the people for greater freedom, respect for human rights and observance of the rule of law in the country. The sermon was an inspiration for the movement for political liberty and democracy in Seychelles. For as a consequence doing that, he was banned by the one-party state government from being heard and appearing on national TV. This move drew Ramkalawan closer into politics. In 1991, still a priest, he joined others who had been active in opposing the government, such as Roger Mancienne and Jean-Francois Ferrari, to form Parti Seselwa, initially an underground organisation, and became its leader.

After the coming into force of the new constitution in 1993, two other opposition parties joined Parti Seselwa to form The United Opposition (UO) and to contest the 1993 general elections. The party won 9% of the vote, enabling it to appoint one member (Ramkalawan) to the National Assembly.

In 1998, Ramkalawan led his party The UO into the second multi-party general elections. The party polled 27% of the national vote and increased its National Assembly representation to three. Ramkalawan became the first directly elected member of the party in the Assembly, winning his home constituency of St Louis. He led St. Louis until handing it over to a young politician to stand in the largest constituency of the country, Anse Etoile, and win the seat. In addition, Ramkalawan was elected Leader of the Opposition, a post he relinquished in 2011 when his party boycotted the National Assembly elections in the search for electoral reforms. In 2016, his party won majority in the National Assembly elections. He also led as the Leader of Opposition leading a majority in the Legislature.

In December 2015, Mr. Ramkalawan led a united opposition in a controversial presidential election which the movement lost narrowly by 1% to Mr. James Michel; who scored 50.15% to Ramkalawan’s 49.15%

On 26th October 2020, Mr. Wavel Ramkalawan was sworn in as the President of the Republic of Seychelles.