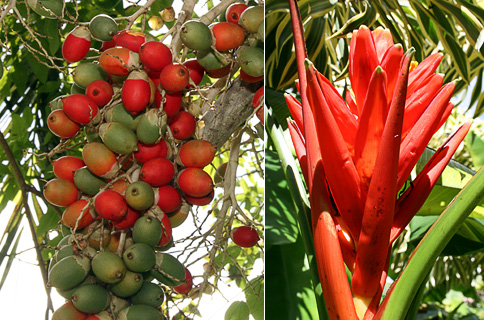 The State House grounds are a wide and open extent of sloping lawns where flowering shrubs such as 'pervanche', 'vielle fille', ixora, hibiscus and creepers like Easter lily vine and 'petrea' create an amazing contrast with the verdant grass. Then there are the towering flamboyant, acacia, bamboo and other exotic plants. But the longstanding attractions of the garden would be the coco-de-mer palms and the tortoise pen.

This magnificent sculpture of the most legendary and venerable figure in the colonial history of Seychelles was made by residential Italian sculptor Antonio Fillipin. It was unveiled in 1993 in commemoration of the 200th anniversary of the arrival of Jean-Baptiste Queau de Quinssy in Seychelles on 9th September 1793 when he was appointed Commandant and Civil agent of Seychelles, until Britain took possession of the islands in 1811.

The sculpture is made of cement concrete.

These fascinating endemic palms (Lodoicea maldivica) must be as old as the State House itself. They are native only to two islands of the Seychelles, Praslin and Curieuse. They are rarely seen on Mahe except at the Botanical Gardens at Mont Fleuri and at the Jardin du Roi estate at Anse Royale. The male and female flowers are borne on different palms.

The female coco-de-mer flower develops after fertilization to produce a bi-lobed nut which is the heaviest seed in the vegetable kingdom and can weigh as much as 18kg (40 lbs) and measure up to 2 feet. It resembles the female anatomy. The male coco-de-mer palm has an enormous catkin (a drooping flower cluster) covered in many tiny yellow star-like flowers for the production.

A coco-de-mer nut takes three years to germinate and seven years to become mature, 25 years to start bearing fruit and over 200 years to reach its full size which is about 100 feet for the male and 80 feet for the female. The coco-de-mer nut is protected by law and can be bought and taken out of the country only under strict regulations. Together with the giant tortoise and the sail fish, the coco-de-mer features on Seychelles' national coat of arms.

It seems that it's been a tradition since the days of Romainville for the State House to keep tortoises in its compounds! The reptiles here are giant land tortoises (Testudo gigantean) from Aldabra and they are the only remaining species of giant tortoises left in Seychelles. In the 18th century when the first French settlers arrived in Seychelles, tortoises were in great abundance, with about 15 different species living on various islands. Each visiting ship would take away dozens of tortoises because they could be kept alive on board to provide fresh meat.

The female tortoise lays between 7 to 16 eggs at a time which take a period of 3 to 5 months to hatch. Amazingly enough, the temperature of the soil will determine the sex of the baby tortoises! A cool temperature will produce more males and a hot temperature will produce more females. A male tortoise can be distinguished from a female by the fact that it has a long tapering tail and a concaved or hollowed under-shell. The female which is usually larger has a very short tail and a flat under-shell. An average giant tortoise can weigh up to 50 kilos (110 lbs) and measure up to 5 feet.

The giant land tortoise is regarded as a prehistoric animal that has survived to this day because of confinement to isolated, mid-ocean island archipelagos.