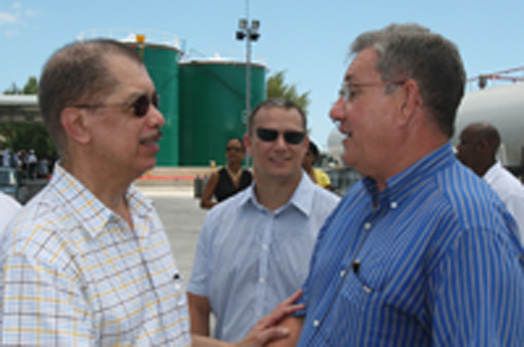 April 1, 2010 -- President James Michel has hailed the inauguration of the new SEYPEC fuel depot and quay on Praslin as the platform that will allow Praslin to further develop and prosper.

The facility was inaugurated yesterday in the presence of senior government officials and the elected members of the National Assembly for Baie St Anne (where the depot is situated), Grand Anse Praslin, and La Digue.Â  The depot will allow fuel and LPG to be delivered more efficiently to Praslin and La Digue and in accordance with the highest environmental standards.

In his remarks during the opening ceremony, Chairman and CEO of SEYPEC, Captain Guy Adam, noted that Seychelles has always aimed to be a leader in environmental policies and it is fitting that we now have a state of the art tanker to transport fuel within our islands and an appropriate facility to store and distribute fuel products that are so essential to the success of the islands' tourism.

Captain Adam also informed the persons present that the Seychelles Paradise has in fact won an award as the significant small ship of 2009 from the Royal Institution of Naval Architects based in the UK.

While touring the facility, the President also congratulated SEYPEC and its staff on their hard work and dedication to excellence.Â  He also noted that the SEYPEC facility would be the catalyst for many more future developments, such as the improvement of the port at Baie St Anne through the development of separate commercial and passenger areas.Â  He added that although the reclamation of Eve island had been criticized in the past, the land available was creating new possibilities, and the new depot would be a further step towards making Praslin more modern and more connected island.