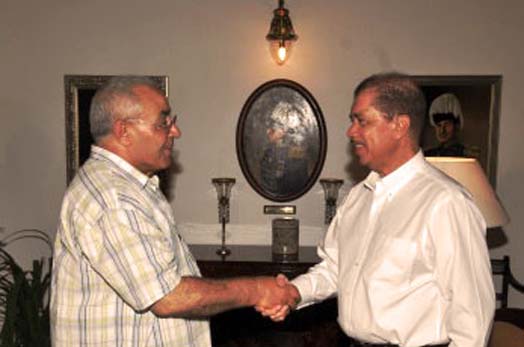 August 3, 2010 -- The ambassador of Libya to Ethiopia and the African Union, Mr A.li Awidan, was received by President James Michel at State House yesterday.

He went to State House as an envoy of President Muammar Gaddafi.

According to Mr Awidan the discussions covered bilateral relations between the two countries, the Afro-Arab summit due to take place in Libya in October, the Afro-Europe summit, also planned for Tripoli, in November.

President Michel visited Libya in April when the Libyan leader noted the excellent opportunities for enhancing the investment and trade ties between the two countries, particularly in the fields of tourism, petroleum exploration and communications.

It was decided that a specialized delegation would come to Seychelles to explore and promote these opportunities.

Libya in February cancelled over 50% of the debt owed by Seychelles. This was part of the support for the successful economic reforms launched in 2008.

President Michel has thanked Colonel Gaddafi for the support.