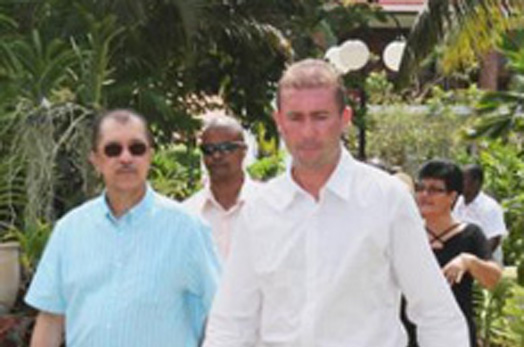 August 7, 2010 -- PresidentÂ  James Michel visited several communities on Praslin yesterday, as part of his ongoing exercise to meet with various communities, consult people around the country, and listen to their ideas and concerns.

The President visited several families in their homes, as well as small businesses and a hotel establishment.

During this visit President Michel said that he was interested to find out what Praslinois residents think of the various development challenges of the island and that he will consider how to better integrate their aspirations into the new development phase of Praslin.

The President visited the open air workshop of craftsman Roland Dupuy and was impressed with hisÂ  use of coconut and coral for the creation of objects of art.

"I am encouraged by the spirit of entrepreneurship on Praslin, and I will continue to support and encourage craft work initiatives. This is an important way to create wealth and promote our culture and creativity," said President Michel.

"I am very impressed with Le Duc de Praslin. It is a small Seychellois hotel establishment which has so much potential for even greater development. I congratulate Mr. Payet for doing a great job and I encourage others to invest in similar establishments," said President Michel.

The President noted that the hotel was a good example of the way the Seychellois business community can make use of the opportunities of a liberalized economy to invest in the future of the tourism industry.

" It is time for Seychellois to take more ownership of the tourism industry and develop authentic products, which offer our Creole culture and hospitality."