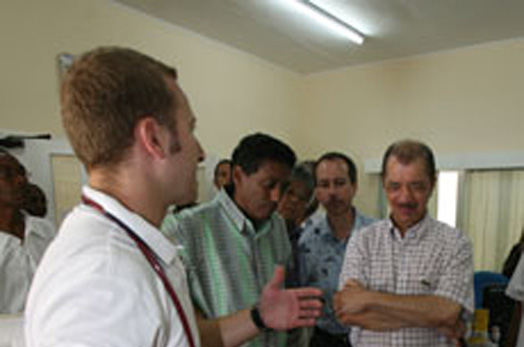 August 9, 2010 -- President James Michel visited the Silhouette school, the health centre, as well as several homes on the island on Saturday afternoon.

The President said that he was impressed with the level of development of the island, and the cooperation between the Islands Development Company and the Labriz Silhouette Hotel.

"We have seen on Silhouette today that a combined public and private sector partnership in the management of the environment and the provision of services to community that is sustainable," said President Michel.

The President congratulated Labriz for this partnership and called on other stakeholders in the country to join the Government in replicating this model around the country.

The President noted that Silhouette had one of the best schools in the country and that facilities for the students were of a very high standard. The President also visited the health centre, which is run in a collaboration between the Ministry of Health, the Labriz resort and IDC.

"The Labriz resort has shown that a collaborative effort in community development is possible, as it is working together with the Government in the development of better services on the island."