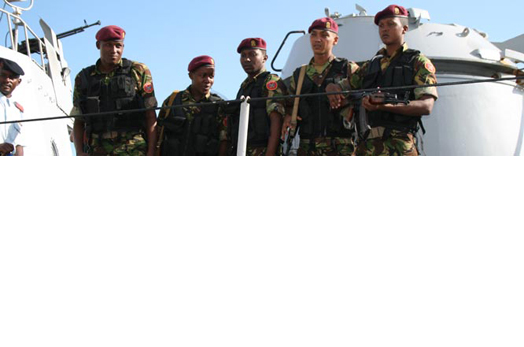 Minister Joel Morgan, who is the Head of the High-Level Committee on Piracy, said that the seven Seychellois fishermen Stephen Barbe, Delmart Isnard, Dominic Malvina, Sony Alcindor, Pascal Leonel, Amed Maillet and Dominic Celestine. He said they were not hurt during the rescue operation. Their fishing vessel "Faith" is being towed by the Coast Guard, together with the pirate skiffs.

President James Michel, who is the Commander in Chief of the armed forces, has sent a message of congratulations to the officers of the Seychelles Coast Guard, the SCG airwing and the Tazar unit for their successful rescue operation today.

"We are very proud of you and your bravery in rescuing the 7 Seychellois fishermen from the hands of Somali pirates. It was a targeted operation and once again you have proved your skill and capability to defend the nation and fight against the piracy scourge," said President Michel.
" We rejoice with the families of the 7 fishermen, in their freedom, and thank the Seychelles Coast Guard and the Tazar unit for liberating them. We all look forward to their safe return to Mahé."

The piracy incident took place in the Seychelles exclusive economic zone. The vessel Faith,Â  a 33-foot fishing vessel, was hijacked by Somali pirates and was detected approximately 240 nautical miles north of Mahé by three surveillance planes.

The Seychelles People's Defense Forces maritime surveillance aircraft, in a joint operation with the EUNAVFOR Luxembourg maritime patrol and reconnaissance aircraft as well as the French E3F aircraft detected the boat and the presence of pirates onboard.

TheÂ  Seychellois crew members had gone out to fish for sea cucumbers.

The pirates headed North West towards Somalia and the Seychelles Coast Guard intercepted the boat half way between Somalia and Seychelles.