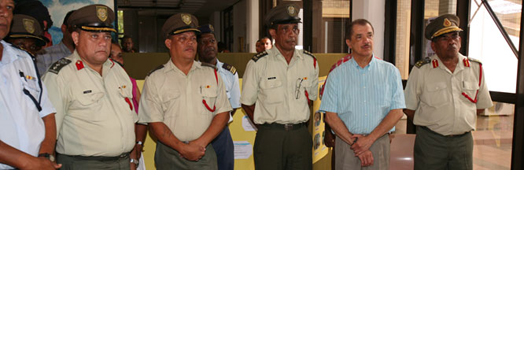 Opportunities for careers in the military

November 25, 2010 -- President James Michel, who is the Minister for Defence and the Commander-in-Chief of the armed forces visited the Defence Forces exhibition at the National Library yesterday, which forms part of the Defence Forces Week activities.

The President was accompanied by the Chief of the Defence Forces Brigadier Leopold Payet, as well as senior officers of the Seychelles People's Defense Forces.

At the exhibition the President viewed the various units of the SPDF, their recent activities, and the structures of their command.
Â
"This exhibition depicts the raison d'être of the armed forces; the valuable work and dedication of our servicemen and women. It also shows how we have come a long way as a nation, and how our officers are highly skilled for various types of military engagement," said President Michel.

The President said that the armed forces have improved their training and capacity building, and that a career in the forces is something that many young Seychellois may today find more appealing.

"I urge young people who have not decided on a career, to come and look at the Defence Forces Exhibition this week, and you will be able to see the opportunities of the SPDF, and the good work they are doing."

The President thanked the officers for their dedication and hard work in the realization of the Defence Forces Exhibition.

The exhibition will remain in the National Library until Friday 26th November and will move to theÂ  SENPA building in Victoria on Saturday 27th November.