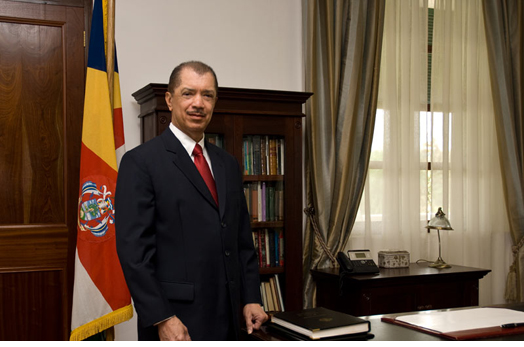 President James Michel has left Australia following what he described as a 'highly successful' state visit.

"This visit was a great success and a great encouragement as we have seen that Australia is looking West towards the Indian Ocean and Africa and sees Seychelles as a leader in sustainable development of the Small IslandÂ  Developing States as well as a leader for climate change advocacy," said President Michel at the end of the visit.

The President said that it was a pleasure to meet a wide range of the Seychellois diaspora in Australia, who have the potential to contribute to the development of Seychelles as well as Australia.

In Canberra, the Presiden met with the Governor General Quentin Bryce as well as Prime Minister Julia Gillard.

"We have reinforced our already excellent relations and have pledged to intensify our cooperation and exchanges. We are particularly appreciative of the Australian government pledge to support the institutional framework of the Association of Small Island States,"
said President Michel.

The President also discussed development and environmental issues with the Minister for Resources, Energy and Tourism, Martin Ferguson.

President Michel spoke about the Seychelles' Energy policy for 2010-2030, which emphasizes on energy efficiency and renewable energy and has set a minimum target of 5% and 15% of electricity generation to be supplied by renewable energy in 2020 and 2030 respectively.


The President noted that Australian investment in the renewable energy sector is welcome and that Seychelles is researching the best and most appropriate technology to achieve its targets.

The President also emphasized the need to develop tourism links between Australia and Seychelles as Seychelles receives around 1000 tourists from Australia each year but has the potential for greater growth. The President has called for direct air links to be established from Australia to Seychelles in order to improve tourism and trade flow, and make the two countries more accessible to each other. This was further reinforced with his meeting with the Victorian Employer's Chamber of Commerce and Industry.

During his meeting with the Speaker of the House of Representatives, Mr Harry Jenkins and the President of the Senate, Mr John Hogg, the President and the Australian parliamentarians spoke about the possibilities of setting up of a parliamentary exchange visit between the Seychelles National Assembly and the Australian House of Representatives which could serve as an important platform for both countries to exchange views on mutual concerns and promote bilateral cooperation in such areas as international cooperation, and environmental protection.

The President also met with the Deputy Leader of the Opposition of the Australian Parliament, Mrs Julie Bishop.