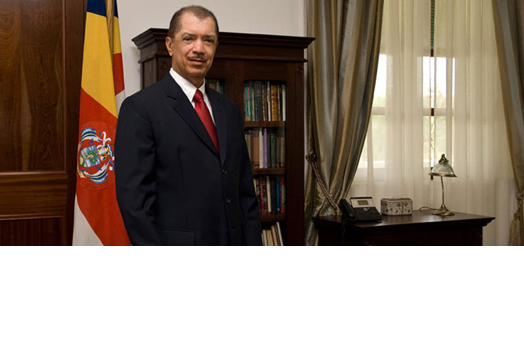 President James Michel has cancelled his working visit to India where he was due to address the Delhi Sustainable Development Summit 2013 on Thursday.

The President was also expected to attend the presentation of the Dornier Do-228 aircraft from the Government of India to Seychelles and to meet with the Prime Minister of India, Dr Manmohan Singh and the President of India, Mr Pranab Mukherjee.

“ Due to the humanitarian crisis following the flooding disaster of this week, I will not be able to attend the engagements in India, in order to be with my people at this crucial moment. There is much work that needs to be done, and we need to mobilize all necessary resources to address the needs of the people,” said the President.

The President will send a message to Summit to highlight the issues concerning sustainable development and small island states.
Mr. Michel will be represented at the Summit  and at the Dornier handover ceremony by the Minister for Foreign Affairs, Jean-Paul Adam. The Minister for Environment and Energy, Professor Rolph Payet has also cancelled his attendance at the Summit, due to his duties as the Chairman of the the National Risk and Disaster Management Committee.

The 13th Edition of Delhi Sustainable Development Summit will take place this week under the theme ‘The Global Challenge of Resource Efficient Growth and Development,’ organised by The Energy and Resources Institute (TERI)  in New Delhi. President Michel attended the summit in 2011 and 2012.

• India made the announcement of the donation of a Dornier surveillance aircraft to Seychelles in July 2010, which was then constructed at Hindustan Aeronautics, Bangalore. During this time Indian loaned a Dornier aircraft to Seychelles, together with a 33 person Indian air crew, in order to operate the aircraft while undertaking the training of local counterparts.

• The Delhi Sustainable Development Summit will be inaugurated by Indian Prime Minister Manmohan Singh and will also be attended by the Finnish President Ms. Tarja Halonen, and the President of Kiribati Mr. Anote Tong,  President of Guyana Mr Donald Ramotar, as well as the former President of Guyana Mr Bharrat Jagdeo, together with decision-makers from governments, private sector, NGOs, multi/bilateral organisations, academia and research institutions from around the world.