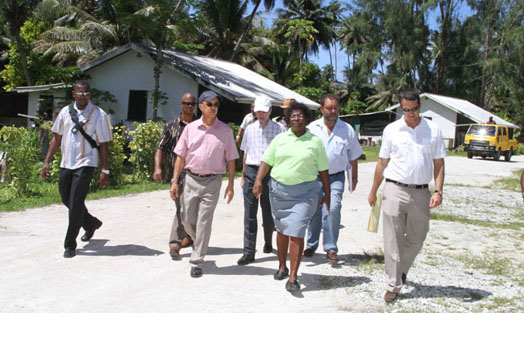 April 26 2013-- President James Michel visited the Coëtivy Island Open Prison today, where he viewed the work of the prisoner rehabilitation programme, as well as plans to extend the prison facilities, and develop the island's infrastructure.

The programme is run by the Prison Service in collaboration with the Islands Development Company.

The President viewed the work of the prisoners in coconut oil production (copra), the IDC fire service, clearing and landscaping of land, carpentry work, farming, fishing, production of brooms, a bakery, a library as well as well as their areas of recreation, living accommodation and their artisanal works.

"I am impressed by the work being done here... it is a good programme and the prisoners are developing skills and they are learning the value of work for them to be able to reintegrate into society afterwards. I think the programme should be termed 'rehabilitation through work,' and it is being done here. I think we are achieving something, we have to develop it further and ensure that we give maximum opportunity for all the prisoners to be able to rehabilitate," said President Michel.

The President met with many of the prisoners and spoke to them about their experiences there, and the work they are undertaking. He urged them to work hard and make a new life for themselves when they return to society. Many of the prisoners expressed their regret for the mistakes they made in their lives and said they had learnt many new skills by working in the open prison, which they would use when they finish their sentences.

The President congratulated all the staff of the Prison Service and the IDC on the island for the work they are doing to rehabilitate the prisoners.

The Minister for Land Use and Housing, Christian Lionnet also showed the President land use plans for the island, in order to develop the parts of the islands which are remote from the prison area, and which have potential for tourism development.

The President also viewed plans for the extension of the prison service on the island, where facilities will be constructed for a closed prison area for prisoners who need drug rehabilitation, and following a period of treatment and behaviourial improvement, would then be moved to the open prison.

The Coëtivy Island Open Prison was set up in August 2010. Since then a total of 148 prisoners have been transferred to the programme, where a total of 36 prisoners completed their sentence and have been released. Some have been employed by the IDC. Only 2 prisoners have since re-offended in the last two and half years.

Coëtivy Island is found 300km from Mahé. More than half of the island is not developed and remains forested.

Prisoners in the open prison are remunerated for the work they undertake for the IDC, which they are able to access once they finish their sentence.

The President was accompanied on the visit by:

Mr. Christian Lionnet, Minister for Land Use and Housing

Mrs. Lise Bastienne, Secretary General of the Executive Office of the President

Ms. Marie-Claire Elizabeth, Chairperson of the Friends of Prisons Association