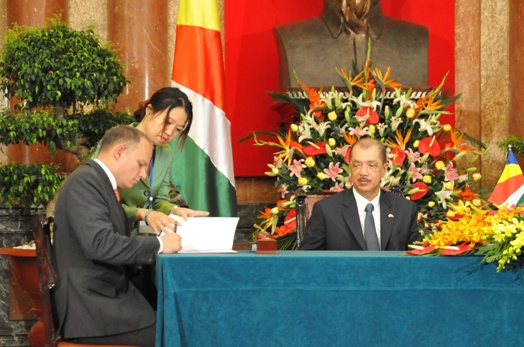 President James Michel and President Truong Tan Sang have today, witnessed the signing of five Memoranda of Understanding on bilateral cooperation between the Republic of Seychelles and the Socialist Republic of Vietnam.

The first agreement which was signed by the Minister for Foreign Affairs, Mr. Jean-Paul Adam and the Deputy Minister of Foreign Affairs, Mr. Hồ Xuân Sơn  with a view to encouraging closer and more frequent collaboration between the Seychelles and Vietnamese Ministries of Foreign Affairs,  in order to enhance the cooperative relations across an array of areas including trade, technology and culture as well as reinforcing the economic, cultural, scientific and technical cooperation signed in August 2010.

The bilateral Air Services Agreement (BASA), seeks to expand and  diversify  air travel between the two countries and the tourism market, with a particular focus on Seychelles to attract more visitors from the Far East and encourage business and tourism exchanges between both countries. This agreement was signed by the Minister for Foreign Affairs, Mr. Jean-Paul Adam and the Vietnamese Minister for Transports, Mr. Đinh La Thăng.

The twinning agreement between Victoria and Hanoi was signed to help strengthen the people-to-people ties between the two cities and to encourage exchanges in different areas such as economy, trade, science and technology, culture, education, sports, health, sustainable development, environmental protection, urban development and tourism. It was signed by the Mayor of Victoria, Mrs. Jacqueline Moustache-Belle and Chairman of the People’s Committee of the City of Hanoi, Mr. Nguyễn Thế Thảo.

The memorandum between Seychelles Tourism Academy and the Hanoi Tourism College will allow both sides to share their knowledge and skills across the tourism sector and collaborating more in eco-tourism. This agreement was signed by the Minister for Employment and Human Resources Development, Ms. Idith Alexander and the Deputy Minister of Culture, Sports and Tourism, Mr. Hồ Anh Tuấn.