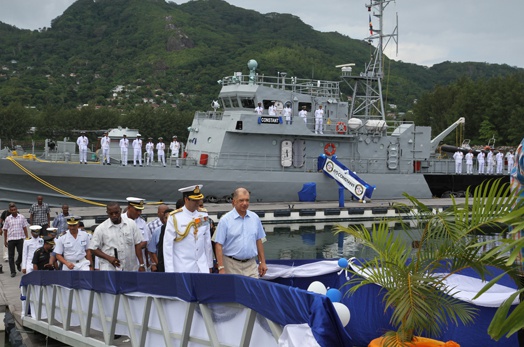 President James Michel met with Admiral Robin K. Dhowan, Chief of Naval Staff of the Indian Navy at State House this morning. Admiral Dhowan was accompanied by the Indian High Commissioner to Seychelles, Sanjay Kumar Panda and other senior officials from the Indian Navy.

The Admiral’s visit to Seychelles coincides with the visit of three ships of the Indian Western Fleet as well as the donation and handing over ceremony of a patrol ship, INS TARASA, which also took place this morning at the Seychelles Coast Guard base, Île du Port.During their meeting, President Michel thanked the Indian government for its continued support, and in showing the importance to the development of relations in the defence and security areas, in the context of a privileged partnership.

“We are very grateful to the Indian government for the donation of the naval vessel – INS Tarasa. This vessel will enrich and reinforce our surveillance capabilities in order to ensure peace and security in our region. We recognise the assistance that India has been providing us for a long time in order to improve our capacity building, especially in the training of our forces. We value this partnership and it is our wish to continue to strengthen it in the future. The Indian Ocean is our ocean and we need to take ownership in ensuring security and peace in order conserve our Blue Economy,” said President Michel during the meeting.

The President and the Admiral shared their views about Indian Ocean affairs, the vision of the Blue Economy concept and maritime security.

“The most important aim of my visit is to renew the strong bilateral relationship and this strong bond of friendship which exists between the Indian Navy and the Seychelles Peoples Defence Forces,” said Admiral Dhowan following the meeting.

Following their meeting, the President, who is also the Commander-in-Chief of the Defence Forces, and Admiral Dhowan together attended the official handover ceremony of the Indian fast attack craft INS Tarasa at the Seychelles Coast Guard base, where they were joined by Vice-President Danny Faure, the Chief of Defence Forces, Brigadier Leopold Payet, the Commanding Officer of the Seychelles Coast Guard, Lieutenant Colonel Simon Dine, senior officers of the SPDF and many dignitaries.

“The donation of another patrol ship by India to Seychelles today represents another milestone in our relations, it also ensures that Seychelles builds its capacity to defend our sovereignty, our economy, our seas, our economic zone, our resources,” said President Michel in an interview with local press after the ceremony.

Furthermore, in his address at the handing over ceremony, Admiral Dhowan said;

“The seas around us are gaining newfound importance as each day goes by because of their linkages with the Blue Economy. And there is no doubt that the current century is the century of the seas. The Indian Ocean which has emerged as the world’s centre of gravity in the maritime domain, washes the shores of both our countries and makes us maritime neighbours, linked with the same ties, currents and winds that connect us. The people of the two countries have stretched their hands over the Equator to build bridges of friendship. With the handing over of INS Tarasa today, these bridges of friendship will be strengthened further and will pave the way for opening up of further avenues of cooperation between the Indian Navy and the Seychelles People’s Defence Forces.”

• Also present at the State House meeting were the Minister for Foreign Affairs, Mr. Jean-Paul Adam, the Diplomatic Adviser to the President, Ambassador Callixte d’Offay, and the Chief Press Secretary in the Office of the President, Ms. Srdjana Janosevic.

• The PS Constant is a Car Nicobar Class vessel and has new modern features,  but is of the same size and model of fast attack craft as the PS Topaz (formerly INS Tarmugli) which is of Trinkat Class. The Topaz was donated to Seychelles by the Indian Navy in 2005.